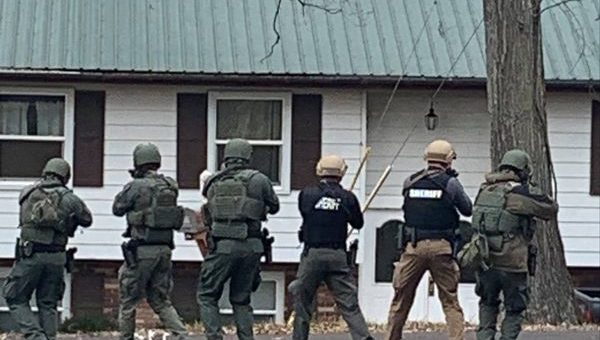 (JENNINGS CO.) – On Thursday, at approximately 9:45 a.m., Jennings County deputies responded to a domestic disturbance involving a firearm in the Hickory Hills subdivision in Hayden, Indiana.

While en-route to the disturbance, deputies learned that a female in the residence had been held at gunpoint and that she had been able to escape the residence where she called for help.

Deputies then attempted to use a loudspeaker to call Dean out. Dean refused to come out but continued to call the female victim.

Members of the Jennings County ERT responded to secure the scene.

Dean spoke with negotiators for over an hour and he finally agreed to come out on the front porch and sit in a chair. Jennings County Canine Sgt. Cody Low was able to position his canine, Axle, to be deployed in a coordinated effort with the actions of the Indiana State Police SWAT. Axle was deployed as Dean was trying to go back inside of his residence and Dean was bitten by canine Axle.

As Axle was trying to apprehend Dean, Axle was struck by Dean multiple times with a closed fist. A less lethal option was also utilized by the Indiana State Police to assist in taking Dean into custody.

After a brief struggle, Dean was taken into custody. Dean was transported to St. Vincent Jennings Hospital for his injuries and later transported to the Jennings County Jail where he is currently being held on $26,500.00 bond on the following charges: intimidation with a deadly weapon, a Level 4 felony; domestic battery, a Level 6 felony; resisting law enforcement, a Class A misdemeanor; and criminal confinement, a Level 4 felony.