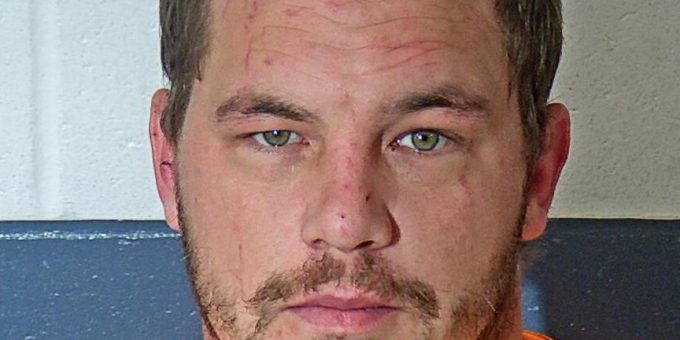 (OOLITIC) – An Orleans man was arrested on a warrant after he allegedly broke into his girlfriend’s apartment.

Lawrence County Sheriff’s Department deputies arrested 34-year-old Cody Akin, of Orleans, on charges of possession of meth, possession of a handgun without a permit, possession of marijuana, residential entry, and criminal mischief.

According to a probable cause affidavit, on Wednesday, April 8th at 4:58 p.m. Lawrence County Sheriff’s Department deputies were called to an apartment on 9th Street in Oolitic after a report from a female that her boyfriend, Cody Akin, had left their apartment on foot and was armed with a gun.

Police arrived a few minutes later and were turning onto 9th Street from Hall Avenue when they spotted Akin walking. Akin was carrying a backpack and officers asked him if he had a gun in it. He replied he did. He was told to stop and take off the backpack slowly. Akin complied and was then taken into custody.

Adkin was then asked if there was anything else in the bag. He said there was some marijuana and a filet knife.

He then told police he lived in Orleans and was walking home because he can’t drive.

In the backpack officers found a Kel-tec PMR-30, .22 Magnum pistol with a full magazine and one round in the chamber. He also had a box of .22 Magnum rounds and a clear container with marijuana and a small package inside that contained meth.

Adkin told police he didn’t leave the weapon at the apartment because his girlfriend was upset and he didn’t want her to hurt herself with it.

The female told police she didn’t want to file charges against Adkin because he didn’t hurt her during the incident.