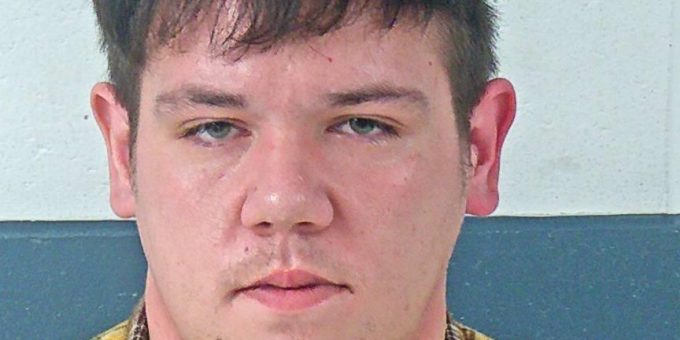 (BEDFORD) – Bedford Police arrested a Springville man on a warrant on two counts of domestic battery resulting in serious injuries under a person the age of 14 and neglect of a dependent.

According to a probable cause affidavit, on September 25th officers were called to St. Vincent Dunn Hospital on a report of possible child abuse.

The hospital staff reported a 14-month-old male had been brought to the hospital by his mother with injuries all over his body.

The mother told police her boyfriend Brian Taylor woke her up around 5 a.m. and told her the child had fallen in the bathtub and he tried to resuscitate him.

The doctor told police the injuries were not consistent with Taylor’s story.

The child had bruising all over his head and neck and various burn marks around his body as well as redness and swelling on his hands. The doctor also reported the child had suffered skull and facial fractures. The baby also tested positive for Suboxone in his system. He was transferred to Riley Hospital for Children.

While transporting the baby to Indianapolis, the ambulance had to stop at IU Health in Morgan County where the child had to be given Narcan due to the Suboxone in his system

The mother told hospital staff that Taylor had tried to talk her out of bringing the child to the hospital.

The officer then contacted the Department of Child Services and they immediately responded to the hospital.

The mother told police she was woke up around 5 a.m. by Taylor saying the child had fallen in the bathtub and that Taylor had put a bunch of toys in the tub for the child to play with. Taylor told the woman the baby had defecated on himself and he was attempting to clean him up. Taylor told her the child slipped in the tub and fell on the toys. He also told the mother he had a cigarette in his mouth when this happened and the child began freaking out and hitting him causing the “cherry” to fall off and landing on the child’s hand and then the child’s back. The mother jumped out of bed and got the baby and noticed something was very wrong when she saw the bruising and the burn marks.

The woman told police Taylor is the child’s biological father.

The mother told police the baby did not have any marks on him when he was put to bed and she couldn’t make any more excuses for him.

The mother told police the incident happened at Taylor’s apartment in the 2320 block of I Street. He has since moved from that apartment.

The detective division then secured a search warrant for Taylor’s apartment.

Officials also learned that Taylor has also gone by the name of Dylan Taylor.

A witness told police she went to the apartment when she heard of the baby’s injuries. She reported there were no toys in the tub but could not remember if the bathtub was wet or dry.

The two women then took the baby to the hospital.

The mother told police she wanted to believe the injuries were an accident, but she didn’t believe they were. She also stated Taylor told her he had given the baby CPR before waking her because the baby was not breathing.

The witness told police that Taylor was “all messed up” when she went to the apartment and she was afraid Taylor had given the baby Suboxone to quiet him.

Photos were taken during the search of the apartment. Police found a spoon with a powder-type substance on it and syringes under a backpack with Taylor’s name on it.

A search warrant was also issued to obtain a blood-test from Taylor. The test showed Suboxone in Taylor’s system. Police say Taylor does not have a prescription for the medication.

The child’s mother was also tested and the test showed she had no drugs or alcohol in her system.

Police then interviewed Taylor’s mother on September 28th. The officer told her he could not disclose their findings.

On October 5th, police obtained text messages sent to his mother from Taylor proving he caused the injuries.

Police spoke to Taylor on September 25th. He said the mother had been to sleep around midnight and the baby was placed in a Pack N Play and he went to bed soon after. He woke around 3 a.m to check on the baby and found he had soiled his diaper and it was half off. He said he didn’t want to wake the child’s mother so he put the child in the bath tub to clean him off. Taylor left the room to go get a diaper and when he returned he found the baby face down in the water. He grabbed the baby and began CPR. He said he had a cigarette in his mouth at the time. Taylor also said he may have performed CPR “a little rough.” He says he thought the burns were from when the “cherry” fell off his cigarette while CPR was taking place. Taylor then woke the mother up and she contacted her grandmother who came to the apartment.

Taylor told police the baby had no injuries the night before and they occurred while he was watching the baby. He told police he uses Suboxone but does not have a prescription for the medication. He denied giving the baby the drug. He told police he heard that if Suboxone was on
his hands it could have entered the baby’s system through the skin. Taylor was then asked about the spoon and the substance found on it. He said that the substance on the spoon was Suboxone.

Detectives then asked Taylor to take a polygraph to prove that he was telling the truth and he refused.

The information was then forwarded to the Lawrence County Prosecutor’s Office and a warrant was issued for Taylor’s arrest.