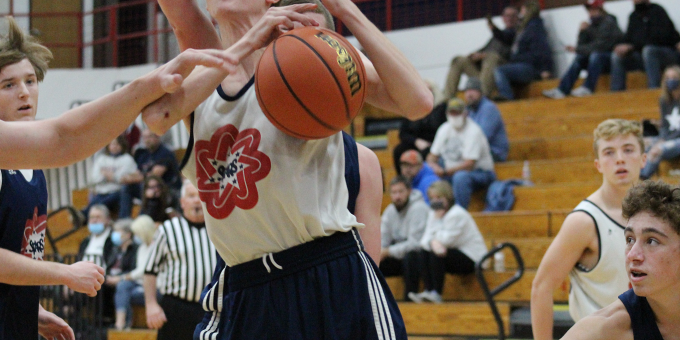 BEDFORD – Every new season, officials are directed to spotlight and stress “points of emphasis” in their work, which is puzzling. The rules don’t change, why should the amount of scrutiny for one particular regulation take precedence over another? Curious indeed.

Bedford North Lawrence’s point of emphasis does not waver. The rules are the same. Defend or take a seat.

While some facets were in preseason mode as the Stars made their public debut in the annual intrasquad scrimmage on Monday night, BNL’s defensive tenacity – particularly with the reconstructed backcourt – was ahead of the game. That could win a few when the games start counting, and that’s not far off.

With senior Aden Pemberton and sophomore Colten Leach (both coming off knee surgeries and playing together for the first time) setting the tone, the White squad posted a 42-21 win over the Blue during four quarters of work. Kooper Staley scored 13 points and Leach added 11 as BNL showed signs of exactly where the points will come from.

The offense is still a work in progress, as the turnovers – ‘carrying’ the ball, or palming for the old-school generation who learned to play without cupping the dribble hand under the ball – and missed shots from close range will attest. The defense was much more impressive.

The projected starting guard combination had some questions to answer. Would the repaired knees hold up? Do they have their conditioning back after so much down time? Perhaps haircuts would help – less weight and wind resistance – but so far the answers are positive.

“We’re further along defensively now than we were last year,” BNL coach Jeff Hein said. “Leach looked like he never had an injury (suffered in the sectional loss to Jennings County). He looked pretty good, He was able to jump and run, some things we weren’t really sure when his surgery got moved back because of the COVID outbreak. That’s a big plus.

“Pemberton is the head of the snake, the guy to do the little stuff. He’s going to defend, make the right decisions with the ball, and it’s great to have him back.”

They were the keys as the White team shot to a 11-3 lead after the first quarter and played even at 10-10 in the second. They got contributions from Ben Cosner and Pemberton during a 14-3 burst in the third.

“Offensively, we were well rounded,” Cosner said. “We have guys that can score. And I don’t think we have anyone that’s afraid. Everyone has stepped up a lot. I have a lot of confidence in us. It’s going to be a good season.”

Cosner is one of several making the transition from football. They ran enough sprints the first week after the premature conclusion of that season to wear out a new pair of shoes. “It was rough,” Cosner said. “We still need to get in good shape.”

The kinks to be smoothed include missed shots. The execution of the offense was there, but the conversions were not always made.

“We were able to get good shots. We didn’t always hit the shots,” Hein said. “I like the fact we’re balanced. We have multiple places we can go with the ball.

“We had some turnovers. One point of emphasis this year is carrying the ball, and we had some calls on that. The kids have been playing open gym, playing street ball, and that’s different.”

The scrimmage was the first step toward the opener against Bloomington North on Nov. 24. The next one is the IHSAA sanctioned scrimmage with Rock Creek on Thursday. Adjustments will be made.

“I’ll watch the film and pick it apart,” Hein said. “I always do. But for the most part I was happy.”