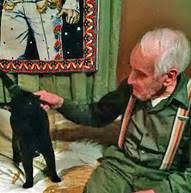 Born June 28, 1935, in Orange County, he was the son of Jasper and Agnew (Bex) Cottengaim.  He first married Dorothy Atchison; his second wife was Golden Ball and she preceded him in death.  His third marriage was to Irene (Davies) Atchison.

Menlo had been employed at Carpenter Body Works, Roberts Brass, and ABB-Bloomington and retired with 20 years of service. He then went to work at Mills Market and when that store closed, he worked at the Jay-C Store until he retired November 3, 2011.

Menlo was a volunteer at Mitchell Manor, played many characters over the years and brought laughter to the residents.  He was Grandpa Jones, an old woman on Halloween, and Sam Craig brought him to Mitchell Manor as Barney Fife and he started writing citations.  The residents loved it.  He was a clown on several occasions.  He most enjoyed playing Elvis Presley every May on National Nursing Home Week.  He dressed and sang the part with Bruce Borders and Travis Albertson.  He and Elvis were the same age and in the Army at the same time.

Menlo worked at Spring Mill Inn under six different managers.  He worked there as a young boy and stayed in the dorm.  He was a bell boy and knew every room in the inn.  He also checked visitors in and out.  In later years he was also a dishwasher and cleaned the kitchen and dining room late at night.  Menlo had a lot of stories about Spring Mill.  He would drive some of the guests to French Lick for gas and they generally bought him a meal at the big hotel.  Then when he brought them back they would give him a $20 dollar bill for a tip.  He really enjoyed his jobs at the inn.  Sometimes they would take off and let Menlo handle it all.  He was very good and talented.

Menlo was a member, deacon and trustee at Bryantsville Church of Christ, and a graduate of Mitchell High School in 1955. He was a U. S. Army veteran of the Korean War.

Menlo was well respected and loved by a lot of people.

Graveside service was held Friday, November 13, at Mitchell Cemetery with Brother Jim Russell officiating.  Military honors were accorded by American Legion Post No.250 and Veterans of Foreign Wars Post No. 9107.