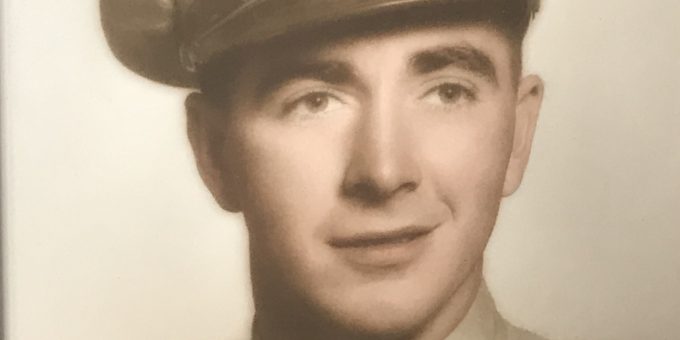 (FAYETTEVILLE) – 90-year-old Louie Smith, a longtime farmer in Lawrence County, reflects back on his life and service during the Korean War.

Smith was born August 9, 1930 in Burns City, Indiana to Haden and Lela Smith whose property sat where Crane Ammunition Depot sits now. The family was forced to move when the naval depot was being formed.

The family moved to Fayetteville. They moved all their belongings with a team of mules.

Smith and his wife Betty have lived in the same house for more than 60 years.

Smith graduated from Fayetteville High School in 1949. In 1951, at the age of 19, Smith was drafted to serve in the war. His brother Maurice, who was also drafted, was already serving in the war. By being drafted each was required to serve one year.

“I’m sure our parents were both worried sick, especially my mother about both my brother and I being over there,” said Smith. “My mother wrote to us all the time, at least once a week, making sure we both were alright.”

When he was first drafted, Smith went to Indianapolis for his initial six weeks of training. He then completed leadership training and earned a stripe in Fort Smith, Arkansas.

Smith was then shipped overseas to Korea where he was a section officer. He lead six men who operated an M114 Howitzer. The shell of that gun is 6-inches.

While over in Korea Smith was able to meet up with some familiar faces including Fayetteville resident Charley Pendley and a Rainey boy from Bedford.

Better yet, on Christmas of 1952 Smith was able to see his brother Maurice. Maurice drove a truck delivering ammunition and supplies during the war. Both brothers wrote to one to another keeping each other updated where they were. Smith knew his brother was only eight miles away and asked his commander if he could go see his brother for Christmas. He was given permission, but had to be back by roll-call the next morning.

“It was wonderful to see my brother and see a familiar face,” said Smith.

Smith also recalled seeing United States President Dwight Eisenhower during a parade in Korea. Many of the troops were being shipped back to the United States. It was a brief glimpse of the president but Smith still remembers that day like it was yesterday.

Smith finally made his way back home. He met his wife Betty Turner one night while cruising around the Bedford square. Smith was able to come to Betty’s rescue and was privileged to provide her a ride home so she wouldn’t miss her curfew and get in trouble.

Jim was killed in a auto accident in 1989 and Scott is the County Councilman for District 1. He also runs a cattle and grain farm and contracting business than runs fiber optic cables underground and has drove a school bus for several years.

Louie continues to farm along with his son Scott. He also worked for U.S. Gypsum in Martin County years ago and drove a school bus for Fayetteville School for several years. He was hired as a school bus driver by Indian Creek Township Trustee Emery Waggoner. That was when township trustees hired all the teachers and bus drivers at the township schools.

Both Louie and Betty are still in good health and continue to enjoy their life together.