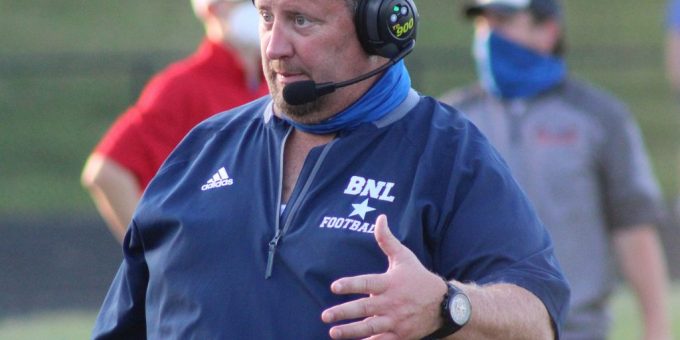 BEDFORD – The season started under an ominous, threatening cloud and ended under a shroud as Bedford North Lawrence’s 2020 campaign suffered a premature virus death.

From its late opening, to early-season quarantines, to the cancellation of the postseason, COVID-19 dominated the headlines around BNL’s drama-weary program. After battling past so many hurdles, after surviving for 9 regular-season games when most predicted less, the Stars suffered a heartbreaking shutdown when school officials announced the end of BNL’s participation in the IHSAA state tournament.

The Stars finished 2-7, ending on a five-game losing streak, and withdrew from the Class 5A sectional when members of the coaching staff tested positive for the virus and were placed in quarantine.

Perhaps it was appropriate for the craziest year ever, when news from a doctor visit was bigger than the outcomes on the field, to end in that fashion. BNL was one of 152 teams (out of 318 across the state) to complete the regular season, then become one of 7 to forfeit its first playoff game when the virus resurfaced. Other programs have since withdrawn from the sectional semifinals for the same reason.

“To be honest, when we first started, if you had asked any of us, I don’t know if we would have said the season would be completed,” BNL coach Steve Weber said. “A lot of us felt we would get into it, try to provide a little bit of normalcy, but ultimately it would be cancelled.

“Then around Game 3, you kind of forget about it. You’re back in school, kind of normal, cases are holding off. You started to think we’re going to make it. At that point, I thought we would make it for certain, right up until our coaches started getting sick.”

The Stars endured a lot. They missed the entire spring of workout sessions, weren’t allowed to start practices until July. They wore masks, practiced social distancing and hand wringing in sanitizer. They lost four starters for two weeks with precautionary quarantines. They won only two games, the lowest number since Weber’s first season in 2013.

“I don’t want to say any season is a failure, because it’s not,” said Weber, now 33-48 in eight seasons at the helm. “The kids got to play football, they got a full regular season. In that respect, it was successful, with the COVID and the garbage going on. They got to play football.

“The number of wins, that’s not acceptable. We don’t go into it striving to do that. It was a rough year. We wanted to play better in some games, we’d like to have won a few more. But the kids played really hard and didn’t quit.”

There were some bright moments. Junior quarterback Brye Lewis was an electric presence, leading the Stars in rushing (865 yards, 11 touchdowns) while completing 43 of 95 passes for 573 yards (7 interceptions, 5 TDs). Zane Anderson and Gavin Scherschel combined for a solid running attack in the triple-option offense. The Stars were impressive during a 35-6 win at Jennings County and a 41-28 triumph at Madison midway through the season.

But BNL also suffered blowout losses to Bloomington North, Terre Haute South and Columbus East (with running clocks in the second half of each) and dropped a 20-19 decision to Jeffersonville in Week 9.

BNL finished with only eight seniors (including starters Luke Allender, Scherschel, James Underwood, James Covey, Austin Messmore and Ben Cosner) on the roster. In stark contrast, the Stars had as many as five freshmen on the field, in part because of injuries.

“That forced a bunch of freshmen into action,” Weber said. “You don’t win many football games, I don’t care what level you are, playing freshmen. They’re not physically or mentally ready for the game. It was an injustice to throw them in the fire like we did. But it was all we could do.

“The positive was we saw a lot of young guys in action. They can actually play the game. Now we have a few years with them. We return a lot of players. So this was a good learning tool for them.”

BNL’s slippage since the 8-3 team in 2018 can be contact traced – or lack thereof – to the weight room. The Stars were noticeably lacking in size, strength and speed. In the future, that must change – even if it means going out to lift concrete blocks or toss tractor tires when the virus closes the traditional weight room setting.

“We were smaller than most teams,” Weber said. “A couple of years ago we were going the right direction, where the kids bought into it. They loved the weight room, we were big and strong, and every time we stepped on the field we were not physically outmatched.

“Something happened after that season, where the kids stopped believing in it. Even with the classes we have, the effort in class or to make training before or after school wasn’t there.

“That has to happen. I don’t know what it takes. We offer classes during the day, we did stuff before and after school. Every opportunity was there. For some reason, other things were more important. I don’t care if you’re playing another sport or what you’re doing, football has to become a priority. If it doesn’t, we’ll never have the season we want.”

BNL is converting the natural-grass playing surface to turf, which is generating excitement. The new field will be ready for 2021. The Stars need to be ready as well.

“That’s our focus, to make football important, not just something we do,” Weber said. “I know the excitement level will go up. It will bring new faces we haven’t seen, it’ll be better for the kids in practice.