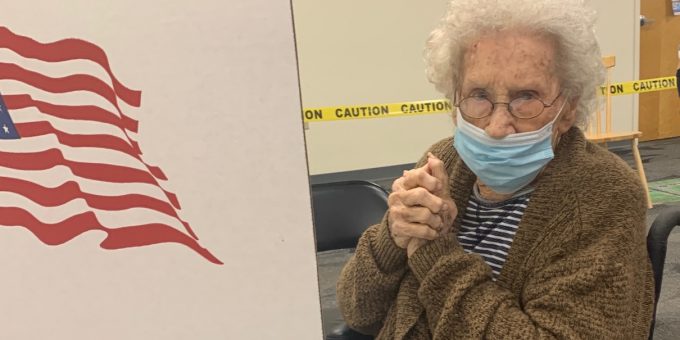 (BEDFORD) – Wilma Webster “ran out of bed 90 miles per hour this morning to be able to cast her vote at the Courthouse Plaza,” said Jeanna Cox. Cox is Webster’s daughter and she brought her mother to the early voting center on Monday morning.

“This may well be my mother’s last time she will vote for a president as she is 97 years of age,” said Cox.

Wilma got married at the age of 15 in Martin County, Indiana where Crane sits now and is probably where she cast her first vote at the age of 18 in Baker Township back in 1941.

Webster has voted in every election since.

“Back then it was not like it is now to depend on the mailman to deliver your absentee ballot. Back then the precinct committeemen and the other party precinct committeeman would meet at the voter’s house. The ballot was sealed, and sealed a second and third time, then would be initialed by both,” said Cox.

“We would go to the voter’s residence; it did not matter what day of the week – she would load us kids into the car and wait for the other party to get there and they would cast their vote,” said Cox.

This morning, Webster was able to get in to vote in less than ten minutes.

“My parents were old fashioned regarding their civic duty. If you do not vote, you do not have the right to complain,” said Cox.