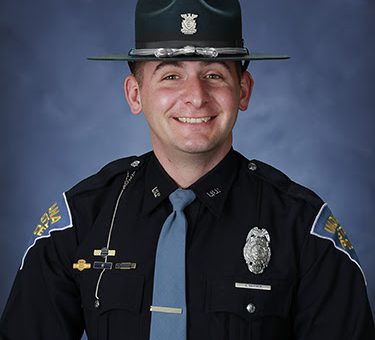 (FORT WAYNE) – Indiana State Police Superintendent Douglas G. Carter has announced the promotion of Trooper Justin Snyder to the rank of Sergeant.  Sergeant Snyder is now transferred from the the Fort Wayne Post, reassigned to the ISP Intelligence and Investigative Technologies Section, where he will serve as a Cyber Crimes Forensic Examiner in Area II (Bremen Post and Fort Wayne Post).

Sergeant Snyder is a native of Albion, Indiana, and a 2001 graduate of Central Noble High School.  He attended Kalamazoo Community College and Indiana Wesleyan, where he earned a Bachelor of Science Degree in Criminal Justice in 2017.

On March 4, 2011, Snyder graduated from the 70th Indiana State Police Recruit Academy and was appointed as a Trooper assigned to the Fort Wayne Post. Other than his primary road patrol duties, Snyder has served as a Field Training Officer, a Background Investigator, ISP Youth Camp counselor, Digital Media Recovery Specialist, and as an ISP Academy Instructor for RMS.  Over the last three years Snyder has been a member of the Fort Wayne All-Crimes Policing Team.  Off duty, Snyder has served his community as the Varsity Coach for the Churubusco Sr. High School girls (8yrs) and boys (6yrs) basketball teams.