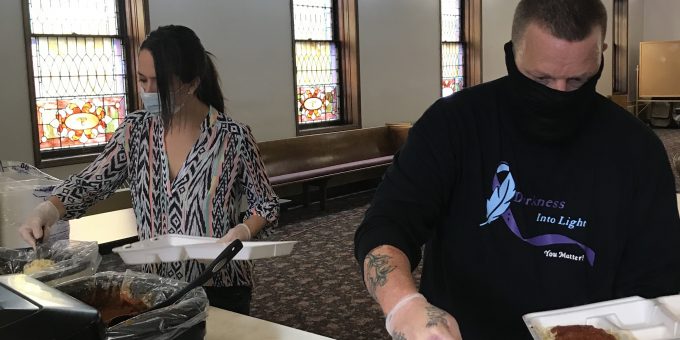 (BEDFORD) – On Saturday afternoon vehicles were lined up to support the “Spaghetti On The Ready” fundraiser for the Men’s Warming Center.

Financial contributions are very important to this year’s winter season for the shelter which operates from November to around April depending on weather conditions.

The shelter normally has between 13 to 20 men seeking shelter from the elements at the shelter every night.

The men’s warming shelter is in its eighth year.

After this winter season is over, the Men’s Warming Shelter will also have to find a new location. The lease for the building is up, and the organization would like to find a more permanent location.

In addition, the shelter would eventually like to be able to be open all year. This is a long-term goal and would depend on funding to see that dream become a reality.

The Men’s Warming Shelter is trying to make sure the center is just not a “Hand Out But Hand Up” giving those who pass through an opportunity to find work, permanent housing, and to help them become successful and productive citizens.

Just before 4:00 p.m. vehicles were lined up for their meals. Bedford Mayor Sam Craig made opening remarks and Rev. Robert Pendergrass got the crowd pumped up for an exciting evening. Father Jegan Peter said an opening prayer and blessed the meal.

Music was played by various artists including Derrick Weidner and Olivia Doyle as vehicles made their way around to get their meals.

Alex Caraway let a yellow balloon off in memory of Father Rick, commenting on how he was smiling down on them Saturday as his legacy to help the poor lives on.

A few tears were shed in his memory but hearts are warmed that Father’s Rick legacy continues.

The Men’s Warming Shelter lives on and you can support them all winter long by mailing contributions of any kind to Post Office Box 430, Bedford, Indiana 47421. Anyone wanting a tax deduction can leave their information in that mailing.

“We would like to thank the volunteers and the many people who contributed to this fundraiser,” said Rev. Pendergrass.