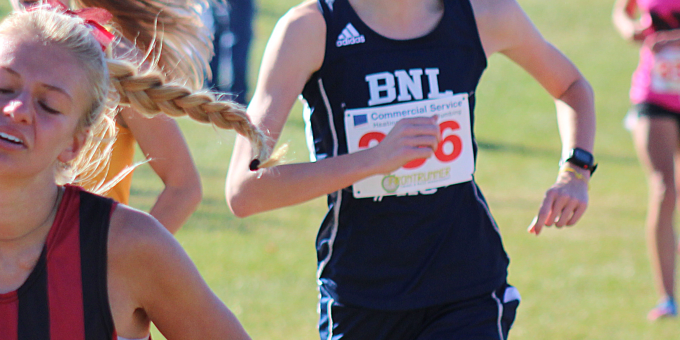 BEDFORD – Autumn Spence was in glide mode, running at ease, chasing a record. Grace Tanksley was in pure panic mode, afraid of being trampled, sure she was in trouble.

They ran completely different races on the same familiar ground and ended up at the exact same destination. Bedford North Lawrence’s top duo earned coveted invitations to the IHSAA semistate race during the turbulent regional on Saturday morning.

Spence, spurred by her final chance to beat the school record on her home course, finished 10th overall while Tanksley crossed in 25th. Both advanced as members of top 10 individuals who were not part of advancing teams. The top five in the 10-team regional moved on, and the Stars – gutted by illnesses – finished ninth.

In her final race at BNL, Spence was superb. She was back in the pack during the first half of the race, then made her move and dashed into the top 10. Coming up 0.46 short of the school record for the course was a little agonizing, but in big-picture terms, she was right on pace for her first semistate appearance.

”I knew if I started in the back, it was fine,” Spence said. “This is my course, I know where I can pick people up. So starting slow doesn’t worry me too much.

“I’m super excited. It’s finally my senior year and stuff is happening. I feel like I’ve worked hard enough for it. It’s still kind of surreal.”

The surreal moment slapped Tanksley across the face. She got caught in the early calvary charge away from the starting line, falling when one of the competitors in front of her went down and caused a chain reaction. Just call her “Crash” from now on.

“I was scared,” Tanksley said. “I got up pretty quick. I thought ‘I’m done, I screwed up bad.’ My breathing was all messed up.”

Tanksley caught her breath and churned ahead, qualifying for the semistate for the second straight year.

BNL could count on the frontrunners, but any shot at earning one of the five team invites to the third stage of the state tournament series was shattered when Myra Roberts and Kaitlyn Phillips missed the race with illnesses. At full strength, the Stars were predicted in sixth place.

”It was a tough day,” BNL coach Jill Vance said. “We knew at the beginning of the day it wasn’t going to happen for our team. But Autumn and Grace were in position. I’m really proud of Autumn. She made a good attempt at that record. She fell short and that happens. She has nothing to regret.”

BNL totaled 223 points. No.16 Northview won the team crown with 43, followed by No.9 Bloomington North (56) and No.19 Bloomington South (72). Edgewood’s Clara Crain was the individual winner in 18:34.48, while her sister Annalyssa – the undefeated pre-race favorite – battled through the race with a sore foot and settled for seventh.

“To make it out, we knew they’d have to run a perfect race,” BNL coach Jonathan Calhoun said. “They were on pace for the first lap, then lost steam. They went for it, but unfortunately we were a couple of individuals away.

”Today showed what it takes to move on. It was exciting to see the growth, since we were very young. It also shows the drive that needs to take place between now and a year from now. We have to have a stronger mentality and find a way to be stronger runners.”

Spence and Tanksley will compete in the semistate at Brown County on Oct. 24, with action set to start at 11:30 a.m. The top six teams and top 10 individuals who are not members of qualifying teams will advance to the state finals in Terre Haute on Oct. 31.