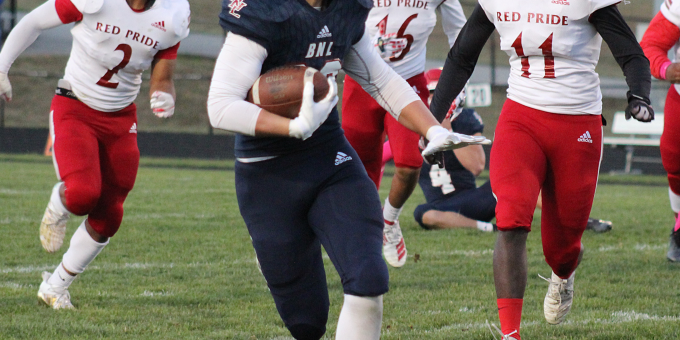 Two fumbles, both in the attempt to make heroic plays with the outcome in the balance, turned a potential victory into another crushing defeat as Jeffersonville escaped with a 20-19 triumph on Friday night.

Davarhy Julian returned a ill-fated option pitch 85 yards for a momentum-shifting touchdown late in the third quarter, and Tyson Maddox recovered a fumble to end BNL’s final drive. Those turnovers were the difference as the Red Devils (3-5, 3-4 in the Hoosier Hills Conference) ended a three-year losing a streak in the series.

The Stars (2-7 and winless at home, 2-5 in the league) will suffer long on this one, after a 19-7 lead vanished, after the two fumbles ripped a win from their shaky grasp.

“That’s our season, right there in a nutshell,” BNL coach Steve Weber said.

The fumbles were devastating. BNL, holding a 19-14 advantage, was driving to start the second half, marching to the red zone. But on 3rd-and-8 from the 9, quarterback Brye Lewis was late on a pitch to Grant Todd on the perimeter. Julian scooped up the loose ball and raced down the Jeffersonville sideline for a go-ahead score that sucked all the air from the opposite side.

BNL’s last drive ended with similar heartache. After Gavin Scherschel converted a fourth down with a tough run, after he caught a 31-yard pass over the middle to get the Stars to the 30, Lewis stepped back in the pocket to pass and decided to bolt with receivers covered.

But as he fought for extra yards, the ball was dislodged. Maddox pounced on it with 46 seconds left.

“Our backs have been against the wall since March,” Jeffersonville coach Isaac Parker said, referring to the COVID storm’s first impact. “We took hit after hit, with injuries and other issues. It’s been a rough season. To have our back against the wall, it was good to see us keep fighting. We fought out of a corner.”

BNL had the Devils cornered most of the first half. The first possession sparkled as Lewis burst free for 11 yards, Scherschel swept outside for 22 more and Lewis slid into the end zone from a yard out for a quick 6-0 lead. That extra point was blocked, which would be a huge factor later.

Jeffersonville answered with a lightning-bolt play. Jordan Ferguson, faster that electricity, broke a tackle, ran over another and zipped 81 yards for a 7-6 lead.

BNL went back to work with success. Todd trampled his way for 26 yards, Lewis connected with Ryker Hughes for 12 more, and Zane Anderson rumbled inside the red zone. After stalling, the Stars scored as Todd converted a fourth-down sweep from 16 yards. The two-point conversion failed, leaving BNL with a 12-7 advantage.

The Stars struck again when Anderson galloped away from 50 yards, his desperate dive toward the end zone coming up a yard short as pursuers gave chase. Karma rewarded him two plays later as he burrowed over from a yard for the 19-7 lead.

The first surge of momentum to go Jeff’s direction came on the final drive of the first half, an 85-yard march that ended with Deydrian Hughes’ sideline, tip-toe catch in the corner of the end zone with 30 seconds left. That created the 19-14 difference.

“You let them in the game,” Weber said. “I don‘t know if we’re mentally tough enough to finish a team. That’s something you learn as you go.”

Ferguson finished with 190 rushing yards. Jeff quarterback Cole Phillips completed 9 of 19 for 72 yards and one touchdown.

“It’s our first streak of the year,” Parker said as the Devils won for the second straight week on the road, adding to last week’s victory over Jennings County. “And you can lean on idea it’s the first time to beat Bedford in a few years. We’re pleased to get back on the win column,. I’m just proud of our kids.”

Anderson paced the Stars with 86 rushing yards. Lewis was limited to 46 yards on 18 carries (including three sacks) while completing 5 of 10 for 63 yards. BNL owned a 15-8 edge in first downs and a 328-274 advantage in total yards. The turnovers changed everything.

“Their quarterback has a heart as big as most helmets,” Parker said. “He plays hard.”

BNL will have two weeks to stew on this outcome, waiting to face New Albany in the semifinal round of Class 5A Sectional 16 on Oct. 30.