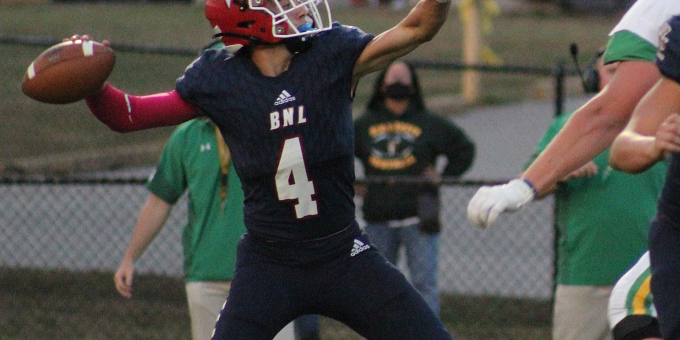 BEDFORD – Floyd Central has the Wright stuff, a test-pilot running back who can fly. And he made all the Wright moves as Bedford North Lawrence scrambled in chase mode.

Floyd star Wenkers Wright, the definition of a downhill runner who gains speed like a fearless kid on a runaway bicycle, exploded off the launch pad as the Class 5A No.9 Highlanders ran over the Stars 42-14 on Friday night.

Wright blasted for 223 yards and scored four touchdowns, and he did most of the work on limited touches (16 carries). Tristan Polk threw for 174 yards and three TDs as Floyd (6-2, 4-1 in the Hoosier Hills Conference) affirmed its status as the favorite in Sectional 16.

The Stars, to their credit, did not die quietly or quickly. No running clock, no rolling over like a mangled carcass on the highway. BNL (2-6, 2-3) battled as quarterback Brye Lewis uncloaked an accurate passing attack (14 of 17 while hitting his first 10) and the usual rugged option running game (111 yards and a touchdown).

The Highlanders, playing on natural grass for the first time all season, were unstoppable. They never punted.

Wright, an Illinois State recruit, could do no wrong. He ripped off three bursts of double-digit yards on the first drive, scoring from 15, and then shattered BNL’s defense on the second possession with two carries covering 65 yards.

He added an 11-yard touchdown reception late in the first half as Floyd took a 28-14 lead into intermission, and he opened the third quarter with three more gaping-hole runs and scored from the 15 for a 35-14 advantage.

“He’s a phenomenal kid,” Floyd coach James Bragg said. “Every night, he comes ready to play. He’s been kind of quiet – I say quiet, I don’t know if a 130-yard average is quiet – but he’s been behind everyone with all the hype about Zen (Michalski, the monstrous lineman headed to Ohio State) and our passing game. For him to shine was huge.”

In recent weeks, BNL was roadkill in losses at Terre Haute South and Columbus East. This team punched back this time. Lewis hit Ryker Hughes for 28 yards to ignite the first drive, and Lewis muscled over from 3 yards and a 7-7 deadlock with 4:32 left in the first quarter.

Down 21-7, BNL had its best sustained attack as Lewis completed four passes during an 83-yard march, and the final play was the most beautiful. Lewis, on 3rd-and-15-from the 22, rolled right, thought about a tuck-and-run option, then lofted a pass back across the field to Dylan Nikirk in the end zone. BNL was within 21-14. It would get no closer.

“Finally,” Weber said of BNL’s stance against the overwhelming force. “Better late than never. You just can’t concede right off the bat. We fought and at least gave it a shot.”

Polk added a 39-yard scoring strike to Colin Cummings in the first half and a 53-yard bomb to Luke Medlock for the last score with 50 seconds left in the third.

Lewis threw for 135 yards, with Hughes catching 5 for 50 yards. Gavin Scherschel had 3 receptions for 48 yards. The Stars did a lot of self-inflicted damage with 13 penalties.

“He’s getting a lot better,” Weber said of his junior QB. “With a kid like that, he trusts his legs a lot more than his arm. He’s starting to get more trust, and the guys will catch for him.”

“He did a heck of a job keeping plays alive,” Bragg said. “And that hurt us. He’s slippery.”

BNL will conclude the regular season next week at home against Jeffersonville. They could see the Highlanders again, although it would be in the sectional final. BNL drew New Albany while Floyd must face Jeffersonville for the third time this year in the tournament openers.