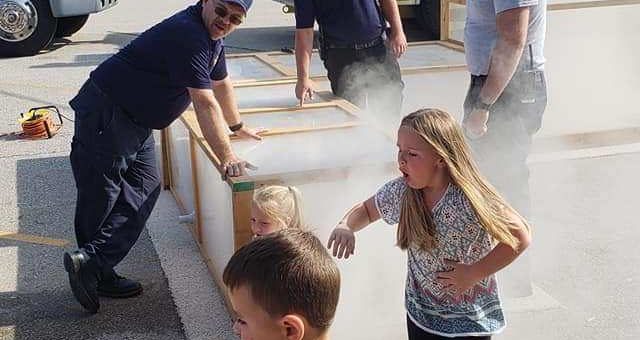 (BEDFORD) – The Shawswick Volunteer Fire Department was established in May 1974. Due to not having a fire station at the time the fire trucks were kept at some of the members houses. Later, the first fire station was built on Sunny Acres Drive.

The department responds to more than 500 runs a year and they depend on fundraisers to help with the expenses of running the fire department. These fundraisers include 911 emergency signs and a Fall Festival which was canceled this year due to COVID-19.

The Shawswick Fire Department has visited Shawswick School for the last 28 years to present a fire prevention program until COVID-19 hit and stopped the program in May.

“We decided to move our program to the end of the school year usually the last two weeks when the weather is a lot warmer and it did not rain as much as it usually does in October,” said Fire Chief Bobby Brown. “We have a smoke house that allows the kids to crawl through that has a smoke detector that is going off, along with the fake smoke.”

“The kids have a lot of fun with the smoke house and learning how to crawl through the smoke and staying low. In addition, Stat Flight flies in and has helps with the program for the last few years and this is a great help,” Brown concluded.

To find out more about the Shawswick Volunteer Fire Department you can go to www.shawswickfiredepartment.com or visit their Facebook page.

Here are a few details of the departments stations: