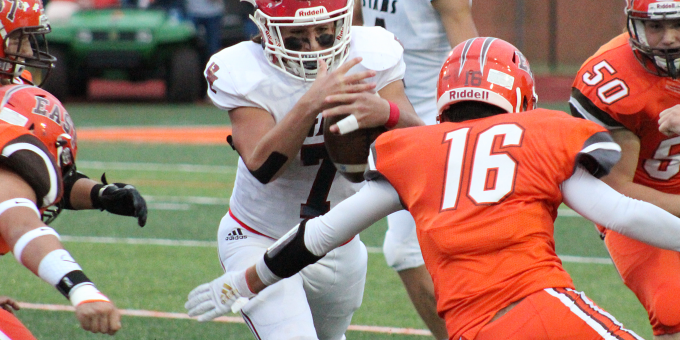 BEDFORD – No letdown. No hangover. Programs like Columbus East do not take a week off. Nobody wins 94 consecutive Hoosier Hills Conference games by taking a break. Even against the lesser enemies.

Even if the intensity meter was short of spiking the highest level, the Olympians had way too much muscle and firepower for Bedford North Lawerence. The Stars never posed a threat or a roadblock as East took another inexorable step toward a 17th straight league title.

Mark McDonald scored three touchdowns, and East blasted to a 35-0 lead after 12 minutes while running over the Stars 63-20 on Friday night at Stafford Field. Everything about this was easy from the East standpoint, although watching it from the BNL sideline got a little weary.

The Olympians (5-2, 4-0 in the league) scored seven of their eight first-half touchdowns in four or fewer plays. If not for the graciousness of East coach Bob Gaddis, and the running clock in the second half, the outcome could have been worse. Much worse. That was expected as East continued its dominance of BNL with its 16th straight win in the series.

Perhaps BNL could have caught East with its shields down after its showdown win over Floyd Central last week. Not really.

“You always worry about that with high school kids,” Gaddis said. “That was a huge win. It wasn’t the intensity we’d like to have all week, but the attention to detail, we felt good about that. I just hoped we could kick it up and come out with the intensity we needed.”

That was evident during the 35-point barrage. Malachi Parks broke a 30-yard touchdown run, McDonald smashed home from 19, Parks blasted over from 2 yards after a BNL fumble, Tryce Villarreal rumbled in from 21, and Parks connected with Charles Claycamp from 55 yards to end the avalanche.

BNL (2-5, 2-2) helped dig its own grave with three turnovers during that span. Nothing went right. Nothing at all.

“We didn’t start,” BNL coach Steve Weber said. “We came off and it was like we took a knee already. We didn’t give ourselves a chance. There’s no doubt they’re the better team, 10 times out of 10, but by gosh we have to give a better showing than that. We’re capable of better than that.”

East didn’t let up. McDonald roared loose from 54 for a one-play drive and 42-0 lead, and Villarreal scored from 7 yards midway through the second quarter.

The Stars finally showed life. Brye Lewis hit Dylan Nikirk for 8 yards, then found Ben Cosner for a 21-yard score. But East answered with another McDonald run to close the half with a 56-7 lead. The running clock was triggered in the second half, and East pulled most of its starters. The real work was done.

“We got off to a great start, executed really well,” Gaddis said. ”We did a nice job of executing the game plan and got on a roll.”

Lewis ripped of a 49-yard touchdown run in the third quarter and capped a 69-yard drive with a two-yard score late in the fourth. He finished with 83 rushing yards.

East, even with limited opportunities in terms of total plays and time, compiled overwhelming numbers: 426 rushing yards (with McDonald totaling 139) while Parks was 5 of 5 passing. BNL had only four first downs in the first half.

“You owe it to yourself to give it a shot,” Weber said. “If you screw up, do it being aggressive. We weren’t aggressive at all and that was the disheartening thing. You have to compete. You have to get off the bus and go. We just didn’t. We were outsized, strength, speed. You can’t line up against teams like that and not be physically ready.”

BNL will return home to face Floyd Central next week.