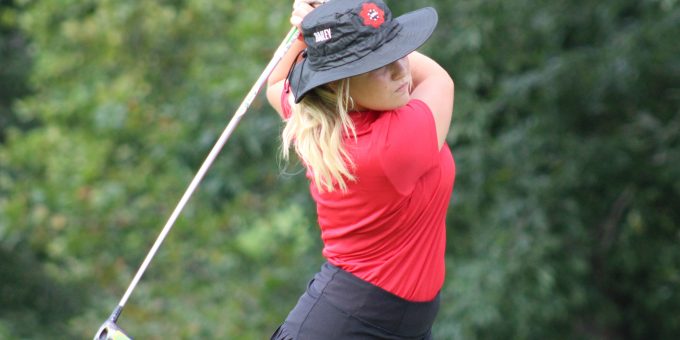 MONTGOMERY – Bedford North Lawrence lost its magic touch as the 2020 season came to abrupt conclusion during the IHSAA regional at Country Oaks on Saturday.

The Stars, chasing one of the coveted, difficult-to-earn spots in the IHSAA state finals, struggled on the back nine and finished fifth among the 18-team field. The top three teams, plus the top five individuals who are not members of qualifying teams, advanced to the finals at Prairie View on Oct. 2-3.

Battling four ranked teams for the invitations to the final stage of the state tournament series, the Stars were in third place after the front nine. But the back half of the course knocked BNL on its backside.

“It was a bad day,” BNL coach Aaron Sanders said. “You have to play all the holes. The bottom line is we didn’t have anybody get it done. We didn’t have anyone play particularly well.”

BNL’s Addyson Bailey (who qualified for the finals last year as an individual) paced the Stars with an 84, Olivia Sanders posted 87, freshman Chloe McFaddin carded 88 and Ashley Chase finished with 89. Kennedy Blair added a 95 from the fifth position. The Stars totaled a team score of 348 and missed the cutoff by 10 shots.

“If you had said it would take 338 to get out, I would have said you were crazy,” Sanders said. “We simply didn’t get it done. We needed one good score and didn’t get it.”

No.1 Evansville North won its seventh consecutive regional title with 301, while No.6 Columbus North was second with 316. No.12 Castle was third with 338 while No.16 Floyd Central was fourth with 341.

Evansville North’s Chloe Johnson shot 2-under 70 to earn medalist honors while teammate Faith Johnson carded 73. The cutoff for one of the five individual tickets to Prairie View came at 82.

BNL, which has won eight consecutive sectional titles and went to the state in 2017 and ‘18, will lose four seniors. McFaddin will be the lone returner in 2021.

“You get what you deserve, but you hate for the seniors to go out like that,” Sanders said. “You can’t look at one round and reflect on that as your career. We’ve had a lot of highlights. Today just wasn’t one of them.

“They’ve meant a lot to our program. We’ve won a lot of sectionals and conference tournaments. They’ve had good careers and they will certainly be missed.”