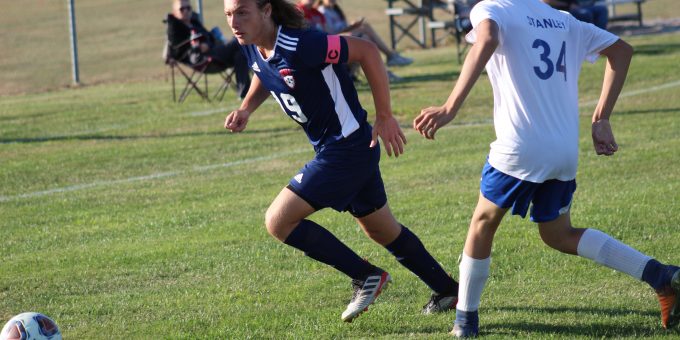 BEDFORD – Evan Voris was miserable, caught in the swirling COVID vortex. He didn’t have it, felt perfectly fine, but he had been exposed to a friend who tested positive. Safety protocols required quarantine isolation for 14 days.

Just in case. He was better safe, but he was sorry.

Those were the worst days, especially when his Bedford North Lawrence teammates were on the soccer field without him. For four games, Voris was away from the sport he loves. For a senior, that’s the ultimate in anguish.

He deserved better. He was rewarded on Monday afternoon.

The Voris goal, with only 13 seconds left, was the culmination of constant second-half flurries that helped BNL post a 20-2 advantage in shots. The ball only left the BNL end for brief moments after intermission, which caused some breath holding when the lead was a single goal.

“I wish it had been a little less dramatic,” BNL coach Logan Jackson said.

BNL could not put the Eagles (1-5) away. Junior goalie Wyatt Fox was the reason, as he made multiple saves with wizardry and will. In fact, the Voris blast was the only one that got past him. Cline’s goal came with Fox on the bench to collect his wits after a collision with BNL senior Max Nolan in front of the net.

With Ethan Scott stepping into the spotlight while Fox recovered, Cline struck. He completed a long run through traffic on the right wing and cracked a shot into the left corner from 18 yards with 24:09 left in the first half.

With Brown County settled in a five-man front on the defensive end, the Stars controlled midfield and kept the pressure on full blast. Fox was almost an impenetrable force in goal, and BNL got a little anxious to score again rather than protect a 1-0 lead for the duration.

“The first half, we kind of nosedived and played to the competition,” Jackson said. “But the second half we played well. We just couldn’t score. We have to get those in the net and finish those opportunities. When we do, we put teams away. But if we let them hang around, you never know at the end.”

Voris finally broke through, causing a celebration among those who knew what he had suffered. Even the Eagles – who missed two weeks of practice and games, plus 9 days of school, with their own virus quarantine earlier this season – could appreciate the moment.

”It’s an amazing feeling,” said Voris, who was shifted to an attacking spot in the formation this season after three years as a center-back defender. “It’s been a joy playing this year.

“Since the beginning of the season, we were being told any game could be our last because of COVID. With that scare, it made me appreciate being out here, being my senior season. I don’t have another season to make up for this. So I have to make it the best I possibly can.”

BNL will host Madison on Saturday.