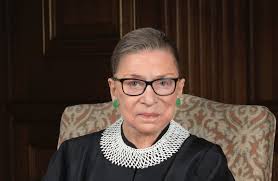 Flags should be flown at half-staff from sunrise to sunset until the day of her interment.

Gov. Holcomb also asks businesses and residents to lower their flags to half-staff to honor Justice Ginsburg and her service.

“As a pioneering woman who triumphed in life, fighting for equality and justice for all Americans, tonight Justice Ruth Bader Ginsburg takes her place in heaven,” said Governor Eric Holcomb. “She leaves an everlasting legacy for which we can all be proud. Janet and I send heartfelt thoughts and prayers to the Ginsburg family.”

Supreme Court Justice Ginsburg died on Friday due to complications of metastatic pancreas cancer, the court announced. She was 87.Ginsburg was appointed in 1993 by President Bill Clinton and in recent years served as the most senior member of the court’s liberal wing, consistently delivering progressive votes on the most divisive social issues of the day, including abortion rights, same-sex marriage, voting rights, immigration, health care and affirmative action.

Ginsburg, who died on the eve of the Jewish new year, was surrounded by her family at her home in Washington, DC, the court said. A private interment service will be held at Arlington National Cemetery.