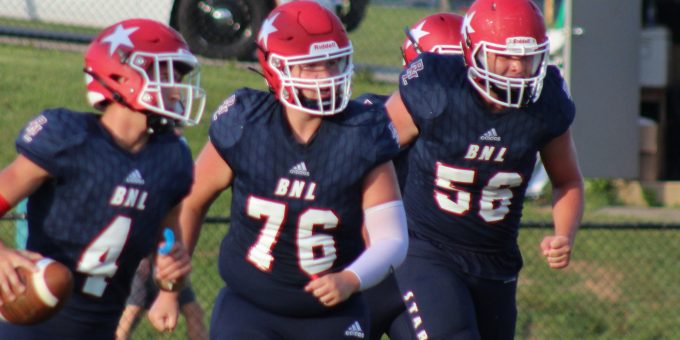 BEDFORD – They toil in virtual anonymity, which is ironic considering they’re up front and usually the biggest people on the field. Hard to miss, until the ball is snapped and all eyes follow it. Then they disappear.

Unless your coach is a former offensive lineman. Then you’re the first one yelled at and pinpointed. They receive blame but little fanfare, publicity or credit. Yet team success depends on them more than any other subset on the roster.

So while Bedford North Lawrence quarterback Brye Lewis has basked in glory – and deservedly so – for his 523 rushing yards and 4 touchdowns so far this season, it’s time to unmask those who have been singing in the background.

BNL’s offensive line, featuring only one senior and a freshman with the best mullet in the business, has melded into a formidable unit as the Stars (2-2) have started to gel. So it’s time for sophomore Jett Jones, senior Austin Messmore, junior Nic Mansker, junior Kaleb Garner, junior Jacob Terrell and freshman Kline Woodward to step out of the shadows and into the limelight.

When 2020 started, late on arrival after the virus-induced delay in practice and preparation, BNL coach Steve Weber had a lot of worries, and his offensive line was chief among them. The triple-option attack puts a lot of pressure on the quarterback for quick decisions, but even more on the men up front to act and react with great speed and power.

“The line is night and day above what we were,” Weber said. “They’re doing a great job. The guys are buying in, getting off the ball and being aggressive. I think they’re playing above their abilities. They’re aggressive and love what they do.

“Every game, every year, my whole career, I will be one to say the game is won or lost on the line of scrummage. If your line does a good job, you’re more than likely going to win. I’m kind of slanted that way, but I’ve been a big believer in giving them the credit. That’s the heart and soul of your team.”

New Seymour coach Tyson Moore, also a former offensive lineman, noticed that unit when he started his scouting. Again, some bias shows, but it also reveals a universal truth about the game. Winning is simple – run the ball, stop the run. That means the battle lines are drawn in close quarters.

“Their offensive line is big,” Moore said. ”On film, they’re the epitome of what you want a line to look like. They’re able to move people out of the way.”

Moore, despite his youth (age 28), has the pedigree to speak about such things. He played college football until an injury cut his career short, and his father is Center Grove head coach Eric Moore, who knows a thing or two about running the ball.

So what does Moore do with the Owls? Throws it, of course. Seymour (2-2, 2-1 in the Hoosier Hills Conference) will feature quarterback Cody Ruble (who rifled four TD passes last week against Jennings County and completed 22 of 34 for 212 yards against Madison) and favorite targets Drew Vehslage and freshmen Bret Perry (three TDS against the Panthers).

“They’re pretty complete in what they do,” Weber said. “What they do more than anything we’ve seen so far is a pretty good screen package.”

The Owls mirror BNL in many ways. They started slow, losing to South Dearborn (36-21) and Jeffersonville (28-7) before rebounding to beat Madison (33-0) and Jennings (47-7). They allowed three special team touchdowns against the Devils, then forced five turnovers in the win over the Cubs.

“I’m pleased with the progress we’ve made,” Moore said. “Against Jeff, we were the poster child for why special teams are essential. The last two weeks were the product of great weeks of preparation, and the kids finally saw what we can do and how successful we can be.”

BNL, 2-0 atop the HHC in the early stages of the league race, is also riding the momentum of the two-game streak against Jennings (35-6) and Madison (41-28). Lewis ran for 216 yards and three TDS against the Cubs.

“I like the way we’re going,” Weber said. “It‘s definitely better than losing. If we can put our best product on the field, we’ll see what happens. The goal is to get better each week, and we’re doing that.”

BNL will be at full strength with senior Gavin Scherschel (injured ankle against Jennings) returning to practice this week and Isaac Williams, who was projected as a starter on the offensive line during the summer before an injury, now seeing action. That will give Weber more options to go with Lewis and running back Zane Anderson.

“Their offense is always hard to prepare for,” Moore said. “There’s a lot of misdirection that can fool you. If we miss a tackle, it‘s a big mistake. They have good skill players, a good quarterback who know how to run it.”

Moore took over when former coach Michael Kelly departed after three seasons for Hamilton Southeastern. Moore, who spent time on his father’s staff at Center Grove and helped the Trojans win a state title in 2015, knew who to rely on for advice.

“I ask him questions constantly, and there are times he will give me advice,” Moore said. “He challenges me, and he knows I will challenge him on certain things. I appreciate things he gives me, but sometimes I need to find it out on my own. Let me fail and figure it out, so I can learn that way. It’s nice have him in your back pocket and reference him a lot.”

If the Sagarin ratings and score comparisons are accurate, this clash could be another classic. Last season’s certainly was. BNL rallied in the fourth quarter for a 24-21 win as Dalton Nikirk connected with Justice Woods for a game-winning touchdown with 16 seconds left.

Game notes: Seymour coach Tyson Moore is the son of Center Grove head coach Eric Moore. This is the only game Seymour will play on natural grass during the regular season.