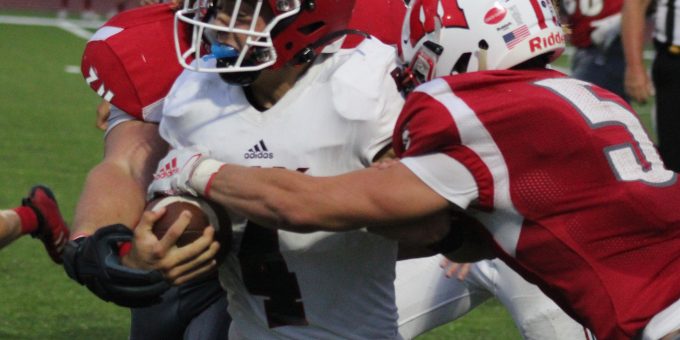 MADISON – Brye Lewis runs with his heart, which beats about 120 mph when he slips a tackler and spots open ground. He runs with toughness, taking thunderous hits and bouncing back for more.

Lewis, the best option in the triple-choice set for the Stars, blasted for 216 yards and three touchdowns, plus a gorgeous touchdown pass for the dagger score, as BNL conquered the Cubs 41-28 and marred Madison’s Homecoming festivities. The Cubs crowned a queen at halftime, but Lewis was the king on the field. The Stars muscled their way to this Iron throne.

Two brilliant plays defined the Lewis performance. The first was a 69-yard burst late in the third quarter, an option run that turned into points when he sidestepped one tackler in the secondary and made the last man miss along the sideline. The second was a beautifully-executed fake and lofted pass to Grant Todd for a 64-yard TD to start the fourth quarter with a three-score lead.

“He’s a great runner, got a big heart. A huge heart,” BNL coach Steve Weber said. “He’s a competitor. You can’t fault him for his effort – at all. When the kid has the ball in the open field, he’s tough. And he makes people miss.”

BNL’s running attack, with Jett Jones returning at center, was relentless and ruthless. Zane Anderson added 79 yards and a touchdown as the Stars muscled their way for 368 rushing yards. Not broke, nothing to fix there.

“Our line did a great job,” Lewis said. “It was rolling, rolling, getting first downs. They did a lot of work.”

The Cubs (0-4, 0-2 in the Hoosier Hills Conference) went the opposite route. Senior quarterback Parker Jones, playing the role of Joe Montana, completed 21 of 33 passes for a whopping 313 yards. Sophomore receiver Colin Yancey, looking like Jerry Rice, caught 11 passes for 174 yards. And Madison did that with two playmakers (running back Trenton Barnes and receiver Louis Humes) out with injuries.

But Madison could not contain Lewis, who broke 9 runs for double-digit yards.

“Defense had a rough night,” Madison coach LeRoy Wilson. “No.4 is good. That’s a quality quarterback they have. Dude is extremely athletic.”

The Stars (2-2, 2-0 in the HHC) started with a 25-yard interception return for a touchdown by linebacker Maddox Ray on the first series. They followed with another scoring drive, highlighted by a personal foul penalty to convert a third down and a Lewis 14-yard scamper. Lewis capped that from 6 yards.

BNL took a 21-7 lead with a 99-yard march after Ray and Luke Allender combined to stuff Madison running back Garrett Gatke on fourth down at the goal line. Lewis had a 16-yard run and a 16-yard pass to Dylan Nikirk, James Underwood added a 15-yard blast, and Lewis churned over from 7 yards.

Madison wasn’t dead yet. Jones engineered a 3-minute drill with big completions to Nick Center, then connected with Curtis Jacobs for a 4-yard score with 10 seconds left in the half.

BNL finally broke away with the two Lewis breakaway plays. Little by little, he started to find the second and third parts of the option, with pitch plays and reads.

“The offensive line did a really good job in the second half,” Weber said. “When we get the pitch down, it forces them to spread out. The passing game is the key. We have to keep them honest.”

“Wow, I knew he had it in him,” Wilson said when told the final numbers. “He’s tough to tackle. He makes dudes miss. It’s amazing what he can do. I knew we had these weapons.”