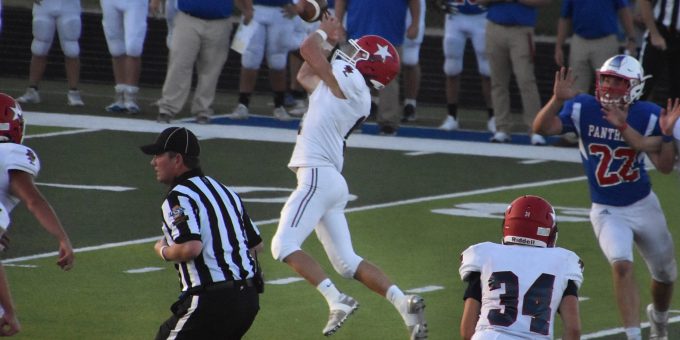 BEDFORD – The Apollo 13 scene resonates, especially today. Ken Mattingly, ordered to miss the space flight to the moon because of possible exposure to measles, gave the NASA doctor a quick stare in Mission Control when asked about his condition by Jim Lovell.

”Are the flowers blooming in Houston?” “That’s a negative, Jim. I do not have the measles.”

The Stars, save for hobbled running back Gavin Scherschel, will return to full strength as they prepare to visit Madison on Friday night. With the four healthy starters reinstated, with the momentum of last week’s victory over Jennings County as fuel, BNL is ready to explode with renewed intensity.

“Just to win a game has been good,” BNL coach Steve Weber said. “It‘s done a lot for our morale. When you’re young like we are, it makes it easier to keep doing that hard work.

“There are no words to tell you how bad James wants to be in there. They’re excited. They’ve been upbeat, the leaders they were before they left.”

The Stars (1-2) certainly need that jolt of enthusiasm for this road trip. That was missing during last season’s clash with the Cubs, and BNL paid dearly for overlooking the threat until it was too late. Lesson learned? We’ll find out.

Madison ruined BNL’s Homecoming last year with a memorable upset, conquering the Stars 21-20 and stopping a two-point conversion in the final seconds. It was the first – and currently only – victory for new coach LeRoy Wilson, only the fourth in series history for the Cubs, and the most disappointing loss in Weber’s BNL tenure.

Now the script is flipped. Madison is celebrating Homecoming, and showing off its new turf field for another visitor. BNL is in revenge mode.

“I never do, period,” Weber said when asked about taking an opponent for granted and the consequences. “I knew it would be a tough game, especially after the week of practice we had. The kids just weren’t into it, and we paid the price.

“This week has been very good. The defensive practice was the best we’ve had in eight years. I’m really excited about that. This team has prepared and has taken them seriously.”

Even at 0-3, even with top running back Trenton Barnes sidelined by a concussion, the Cubs must be taken that way. They have potential playmakers, especially if they can eliminate the turnovers that have plagued them so far.

Madison fell to Paoli 28-27 in Week 1, suffering three turnovers, allowing four sacks and missing an extra point that proved the difference. They suffered a 32-26 overtime loss to South Dearborn in Week 2, then collapsed with 6 turnovers and 120 yards in penalties during last week’s 33-0 loss at Seymour.

“It’s been a struggle, and it hit us pretty hard last week,” Wilson said. “It’s basically protecting the football and focusing on not making the big play every time, just making a play.”

Barnes, who had 191 rushing yards and 3 TDs (plus an 80-yard kickoff return TD) the first two games, will be missed. But Madison’s spread attack will still feature receiver Louis Humes (3 catches, 97 yards against Paoli) and Collin Yancy (6 catches, 96 yards against South Dearborn) as weapons.

“Trenton is an excellent athlete, but at the same time we have other people to spread the ball around,” Wilson said. “It hurts us in the running game, but we’ll be ready to go.”

“They have a wide open system to get the ball to athletes in space,” Weber said. “When you do that, it’s dangerous.”

BNL’s defense has been vastly improved. The Stars have already pocketed four interceptions, including Grant Todd’s 35-yard pick return for a touchdown that sparked last week’s 35-6 triumph at Jennings County.

The Stars will still rely on quarterback Brye Lewis (305 rushing yards) for the offensive ignition. Last week, he was the second-best option as Zane Anderson stepped into the spotlight, taking over when Scherschel departed with an ankle injury and rushing for 118 yards and three TDs.

Barnes was one of the Madison heroes last season, rushing for 90 yards and a score. Parker Jones completed 18 of 26 passes and Humes returned an interception for a score as the Cubs rallied from a 14-5 deficit. Justice Woods almost single-handedly willed BNL to a late win, rushing for 167 yards and scoring all three BNL touchdowns, but he was stopped on the do-or-die conversion attempt with 34 seconds left.

”It was an unexpected win for us,” Wilson said. From that point, Madison didn’t come within four scores of any opponent the rest of the 2019 season, finishing 1-9.

By the way, Madison’s new turf has already paid dividends. The Cubs have played two games in the rain, and their old grass field would have already been mangled for the rest of the season.

Last meeting: Last year at BNL, the Cubs rallied from a 14-5 deficit to stun the Stars 21-20, stopping a 2-point conversion with 34 seconds left to secure the victory. Parker Jones competed 18 of 26 passes for 188 yards for the Cubs, while Justice Woods had 167 yards rushing and all three scores for the Stars.

Game notes: This is Madison’s final season in the Hoosier Hills Conference. Madison has won only five games the last 5-plus seasons