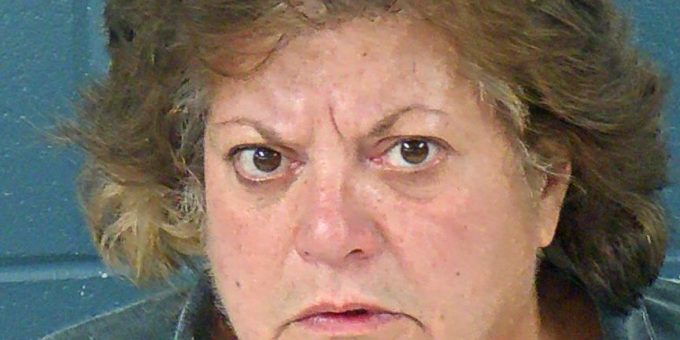 (BEDFORD) – A Bedford woman was arrested on meth charges after a Lawrence County Sheriff’s Department received a report of a woman acting strangely Sunday night.

Police arrested 51-year-old Rhea Wilson, of 1949 Tunnelton Rd., on charges of possession of meth, and possession of drug paraphernalia.

On Sunday a deputy responded to the 740 block of South Leatherwood Road after a report of a female arriving at a home in a black Chrysler sedan acting impaired.

The caller said the woman was nude.

In route to the home, the officer spotted the vehicle traveling southbound on South Leatherwood Road. The vehicle stopped in the middle of the road prior to passing the police vehicle. The officer pulled his vehicle sideways in the roadway to stop the approaching vehicle.

The officer ordered the driver to turn off their vehicle.

Wilson did not have a shirt on. The officer asked her to exit the vehicle with her dog. Wilson took a towel from the front seat to cover herself.

K-9 Flick alerted officers to drugs in the vehicle.

During a search of the vehicle police found a glass smoking device containing a white powder residue and a clear plastic corner of a baggy containing approximately 1.98 grams of a white crystal substance, later field testing positive for methamphetamine.

Wilson’s sister was called to retrieve the dog and Stone City Towing took possession of the vehicle.