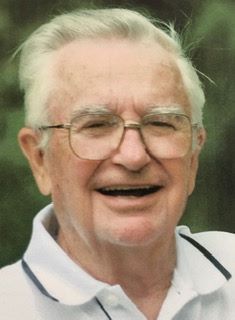 He was born on June 15, 1924, in Hastings, Michigan to Harold B. Martin and Mildred T. (Northrup) Martin. Woody married Magdalena “Mickey” Stuckeyon October 8, 1949, and she survives.

He was preceded in death by his parents, two brothers, Roger Martin and Russell Martin
and one sister, Beverly Orr.

Funeral Mass will be held at 11:00 AM on Wednesday, September 9, 2020, at St. Vincent DePaul Catholic Church in Bedford, burial will follow in Cresthaven Memory Gardens.

Visitation will be from 3:00 PM until 5:00 PM on Tuesday, September 8, 2020, at Cresthaven Funeral Home in Bedford, the rosary service will be at 5:30 PM on Tuesday at St. Vincent DePaul Catholic Church and will be available by live stream.

In lieu of flowers donations may be to the St. Vincent DePaul Society.
Cresthaven Funeral Home is entrusted with his services.