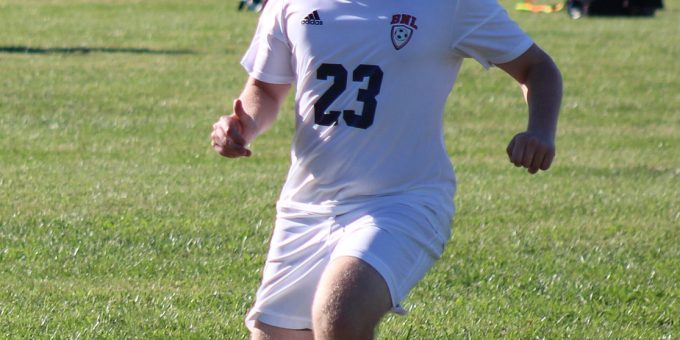 EVANSVILLE – Josh Anderson broke out of his scoring slump with authority, powering Bedford North Lawrence to a 5-0 victory over Evansville Christian during boys high school soccer action on Saturday.

Anderson recorded a hat trick in the first half, getting in the goal column for the first time since BNL’s victory over Mitchell on Aug. 20.

“He’s been getting decent shots and looks, but he just wasn’t able to finish,” BNL coach Logan Jackson said. “He finally broke free. When he did find the back of the net, he did it in a big way. That was good to see him back in the groove.”

Anderson got started at 35:42 of the first half, scoring off an Evan Voris pass. He converted again at 19:50, completing a long run through the defense for a long shot.

Gavin Green made it 3-0 with a header off a Grant Beyers crossing pass at 21:00, and Anderson posted his third goal with 1:34 left on a Lakota Terrell assist.

Terrell capped the scoring with a second-half goal at 25:32. The Eagles slipped to 3-4.

“We played really aggressively,” Jackson said. “We took care of business and did what we should have done. We’re staring to move it and look good. We need to keep building on that momentum.”

The Stars (3-5) will host Columbus East on Tuesday.