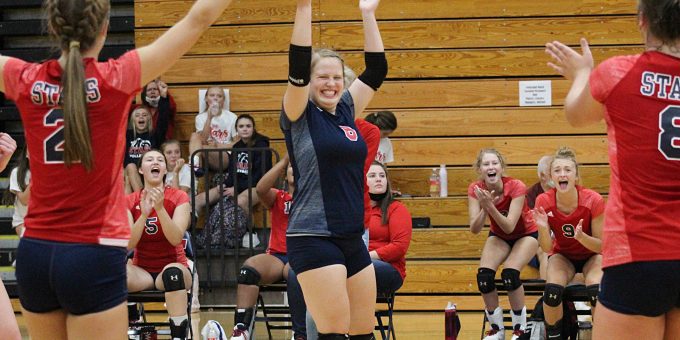 BEDFORD – As predictable as the sunrise in the east, Bedford North Lawrence’s on-off switch got flicked. Win the first set, lose the second. Embrace momentum, then treat it like a plague.

The Stars seemed headed for another five-set conclusion, which is OK because they’ve proven pretty tough in that situation. But why go there if it’s avaoidable?

Not this time. They took another step forward in this turnaround season, retaking control and balance before falling backward.

It’s been a while since such a streak. Hey, it’s been a while – the season opener – since BNL won a second set in a best-of-5 battle. Save that improvement for next time.

With Kern dominating the action up front, with Merritt Callahan and Haley Deckard setting the tone with pinpoint, powerful serves, the Stars wore down the Warriorettes (7-5). They probed, found weaknesses, and punished.

“I thought they were more physical at the net, and they were more scrappy behind the net,” Scottsburg coach D.J. Zipp said. “They didn’t let a ball hit the floor.”

The first three sets followed familiar scripts. Jump in front, stay there. BNL went up 12-6 early in the first, Scottsburg blasted out 6-0 in the second, and BNL went on a six-point run en route to an 18-10 advantage in the third. No gasping rallies.

So when the Warriorettes zipped to a 6-1 lead in the fourth, why expect anything else? That’s when BNL flipped the storyline, fighting even at 9-9, taking a lead on Callahan’s serve, pulling away as Deckard stepped to the back line.

“The block adjusted, the defense adjusted, and that was an absolute game changer. They can defend, they hustle until the play is over. We were very good at keeping it in play.”

“She took control,” Arthur said. “I have full confidence, when I have Carlee in the front, with Haley, Annie (Waggoner) and Myla (Bergman) in the back as my strongest rotation.”

“I was happy with the way we responded in the second game,” Zipp said. “But Coach Arthur has it rolling. I knew they’d get things turned around. It boiled down to we made more mistakes they they did.”

BNL will now shift gears, heading to Floyd Central for a huge test on Thursday,

“That was a great lead into Floyd,” Arthur said. “We want to walk in there and show we’re not the team we have been.”