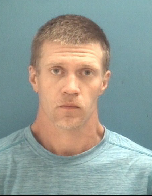 (COLUMBUS) – A Columbus man was arrested after he allegedly attempted to strangle a woman during a domestic fight Monday night at a Columbus hotel.

Columbus Police arrived at the hotel in the 100 block of Carrie Lane at about 8:45 p.m. Monday.

According to a police report a female had bruising on her neck and said that 35-year-old Robert Grissom strangled her during an argument.

Grissom was located nearby and arrested on charges of strangulation and domestic battery.