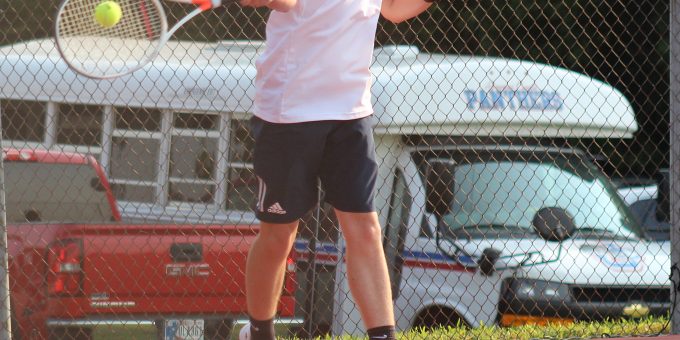 BEDFORD – Winning the first set is not always the omen for success. Bedford North Lawrence’s Caleb Jones and Nate Pemberton learned that the hard way in recent matches. Got to finish what you start.

So when BNL’s No.2 doubles duo won the opening set against Jennings County on Tuesday afternoon, coach Donnie Thomas wasn’t counting on anything. Kind of like one of those false positive virus tests. What do you believe?

This time, the Jones-Pemberton tandem translated the early advantage to the expected end result, and it was a key victory as the Stars (4-3) edged the Panthers 3-2 on the asphalt courts at BNL.

Jones and Pemberton had dropped back-to-back 3-set battles in recent outings, the reason for the angst. Rather than falter, they fought on as they recorded a 6-0, 6-4 win over Greyson Jackson and Alex Leach.

“This time they stayed the course,” Thomas said. “And we needed them. We’re kind of a spurty team.”

The Stars also posted victories in the lower singles en route to their third straight win, all against Hoosier Hills Conference competition. Steven Graham thumped Connor Euler 6-0, 6-2 at No.2, while Graham Turner topped Gage Cooper 6-1, 6-0 at No.3.

Turner’s recent run can be traced to a change in strategy. He’s gone into attack mode, which is against his quiet nature.

The Panthers prevailed at No.1 singles as Owen Law dropped Adam Tlustek 6-2, 6-2. Jacob Vogel and Justin Ramey clipped Konley Woodward and Cameron Gratzer 6-3, 6-4 at No.1 doubles.