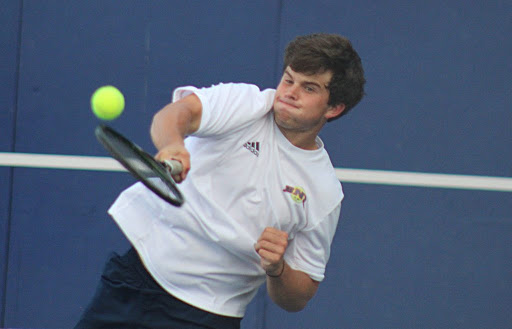 The Vikings, with six of their top seven players back from last season’s squad that went undefeated in the regular season, pounded out a 5-0 win over the Stars on the asphalt at BNL. Barr-Reeve didn’t drop a set, although BNL pushed the issue on a couple of courts before falling.

BNL’s best chance came at No.1 doubles, but slow starts in each set gave the Vikings enough space to survive furious rallies. Tommy Kidwell and Reed Thompson built 5-1 and 4-1 leads in the two sets, then held off Konley Woodward and Cameron Gratzer 7-5, 6-4.

“They waited until they were down before they started kicking it in gear,” BNL coach Donnie Thomas said. “If we could have gotten over that slow start, they played well. They just tend to over-hit the ball. They have to get comfortable instead of trying to put it away from the baseline.”

BNL’s Steven Graham was locked in a competitive duel with Brycen Graber at No.2 singles. Graber pulled away with a late push of energy for a 6-4, 6-2 triumph.

“Steven ran out of gas,” Thomas said. “He was exhausted toward the end.”

“We didn’t have much footwork,” Thomas said. “We would reach. We have to move a little better.”

“They had good moments, but their opponents were really aggressive,” Thomas said. “Their whole team is aggressive. They’re strong.”

BNL will face another powerful foe when it hosts Bloomington South on Tuesday.