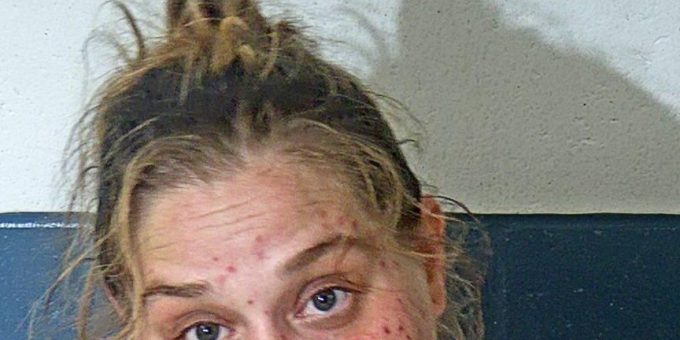 (MITCHELL) – Mitchell Police arrested a Bedford woman Saturday after police were called to the 620 block of West Main Street on three separate occasions to de-escalate situations between 32-year-old Abby Jo Woerdeman and her husband Charles who are still married but going through a divorce.

Charles is the primary resident at the home. Abby’s father is the landlord and he has reported multiple times that neither individual is wanted at the home and he has filed legal eviction action.

While on scene Saturday, Abby again became verbally abusive toward officers and called the Indiana State Police because she felt Mitchell Police “was not helping her.”

Abby was told multiple times of the civil nature of her problems and advised yet again on how to proceed legally.

At one point a Mitchell Police officer called the prosecutor and was advised there was nothing police could do because this was a civil issue.

During this time Abby started screaming at an ISP dispatcher who was on the phone who then hung up on Abby due to her abusive attitude. At one point Abby advised that she was “dying” and requested an ambulance. When the ambulance arrived she refused treatment and refused to cooperate with the ambulance crew.

As the ambulance was about to leave Abby told police she was dying and an officer told her that if she passes out they would call the ambulance back. Abby stated “if you do, I will kill you.” The officers told Abby if she threatened officers again for attempting to keep her safe she would go to jail for intimidation.

Officers then left the home after learning two ISP Troopers were responding to the home.

When officers returned later to assist Abby in getting some of her belongings, she got into an argument with one of her husband’s friends who was helping him because he is disabled.

The two women were arguing about a dog that started to run out of the home. Abby grabbed the dog from the woman’s hand which twisted the woman’s fingers in the dog’s harness. Abby continued yelling at Charles, the woman and police. She was told multiple times to calm down. She would not calm down and the situation escalated again. At one point Abby got inside her vehicle and acted as if she was having a panic attack due to the woman filming Abby’s behavior.

Abby again requested an ambulance and one was requested. As the officer was attempting to calm Abby down, she jumped out of her vehicle and went back to retrieve items from the residence. Abby then refused treatment and the ambulance was alerted not to respond.

Abby then came back to her vehicle and was screaming at the officer, telling him she “was dying.” The officer asked if she needed an ambulance and she refused one.

She then cursed and got into her vehicle and drove way erratically and left her daughter inside the apartment. The daughter came out of the apartment crying. The officer alerted the Department of Child Services.

Several minutes later Abby arrived back and jumped out of her vehicle and
began to retrieve items from the residence.

While in the apartment Abby again got into an argument with the woman. Police rushed inside to calm the situation.

Abby continued to scream at officers and the woman and was then told she was under arrest. Abby then fled to a stool located behind the door. An officer asked Abby to stand up and place her hands behind her back. Abby stood up and as the officer went to handcuff her, Abby pulled away from the officer. She was placed on the floor and handcuffed.

Abby continued to curse at officers and threatened to kill the woman.

Police say the woman suffered a cut to the left side of her forehead where Abby had pushed her into a support pole located in the living room.

While transporting Abby to jail, she continued to be loud and abusive with the officer.

Abby then stated that she was “dying” again and wished to go to the hospital. Upon arrival at IU Health Hospital she continued to be verbally abusive to the hospital staff and refused care many times.

Abby was then cleared by IU Health and transported to jail on charges of battery, disorderly conduct and resisting arrest.

While at the jail, she continued to be uncooperative with jail staff.