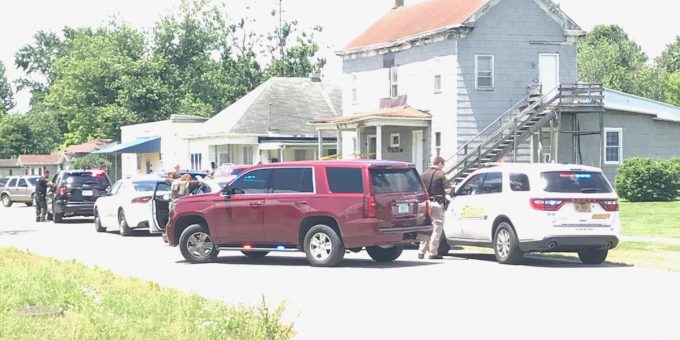 (MITCHELL) – Four people have been charged with attempted murder in the stabbing of two men.

On Sunday at approximately 12:15 p.m., Mitchell Police officers responded to the 900 block of West Warren Street after a report of a fight. While officers were en route, they received information that two men had been stabbed.

When police arrived officers found that 21-year-old Tavion Lamb and 23-year-old Kyle White had suffered multiple stab wounds to their torsos and legs. White was bleeding profusely from a stab wound to his leg. Police applied a tourniquet on his leg to help slow the bleeding. Lamb was unresponsive. Both men were flown to a Louisville trauma center.

White told police that Conan Farley had kicked the door down along with three other males and they had pistols and knives.

Police searched several areas for those accused to be involved in the incident.

A short time later, officers located 25-year-old Conan Farley in the 700 block of Mississippi Avenue where he was arrested. Farley had taken his grandfather’s vehicle without permission. Police recovered that vehicle in the 600 block of Main Street and found marijuana and drug paraphernalia inside the vehicle which Farley said belonged to him. Police also located a BB gun in the trash bin at the Dollar General Store.

Farley refused to answer questions and said he was not involved. He was then transported to the Lawrence County Jail.

Police then received information that 27-year-old Dillon Shaw was in the area of Trail Lane. Shaw was arrested without incident.

Shaw told police that on Sunday morning he was at Farley’s home when four people came into the house with masks and guns and demanded drugs and money from him. The four took $180 and roughly 150 gummies in the shape of watermelons that had been injected with Xanax.

Shaw told police that Cooper kicked in the door and all four went into the house. They found Lamb in a bedroom and Conan and Cooper began beating on him and yelling that they wanted their stuff back. At some point Lamb became involved.

Shaw told police that he and Couch stood back and watched. Shaw then told Cooper not to stab anyone and asked Cooper what he was doing.

The four then fled. Cooper ran one direction while Shaw took Farly to his father’s home on Old State Road 60 West and then went to Couch’s house on Tarry Park Lane.

While at the home, Shaw told police he smoked weed to calm his nerves. That is when Cooper showed up with a pistol that he had taken from the home on West Warren Street.

Shaw told police that Cooper and Couch were still hiding at the home on Tarry Park Lane. He also warned police to be careful because Cooper had threatened to use the gun.