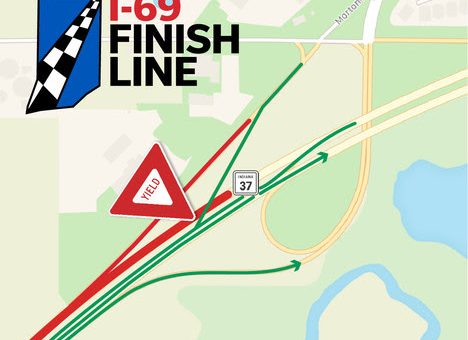 (MARTINSVILLE) – Drivers should prepare for a new traffic pattern on State Road 37 at the State Road 39 interchange.

Today, I-69 Finish Line contractors plan to shift southbound traffic across the center median at the S.R. 39 interchange. S.R. 37 southbound will merge into one lane before crossing the median.

With the change, only the current northbound side of S.R. 37 will be in use, carrying one lane of traffic in each direction. The new configuration is expected to remain in place for the next few months. The change will mean width restrictions will be in place on S.R. 37 between Liberty Church Road and just north of S.R. 39.

The current traffic pattern for S.R. 37 northbound will remain in place. Traffic is encouraged to merge into the left lane as the right lane remains an exit-only lane onto S.R. 39/Morton Avenue in Martinsville.

The Indiana Department of Transportation urges drivers to slow down and avoid distractions as they approach the new traffic pattern.

Today crews will be doing work at State Road 39 and Morgan Street that requires the deactivation of the signal at that intersection from approximately 8 a.m. to 4 p.m. Flaggers will control traffic at the intersection while the signal is down.

Crews were expected to stripe a second dedicated turn lane Friday for eastbound State Road 144 traffic turning left onto northbound S.R. 37. Signal changes are scheduled for Monday. This will help move traffic through the detour during the temporary closure of S.R. 37 in Martinsville next year.

Temporary signals planned for S.R. 37 at Banta Road and S.R. 144 at Old S.R. 37/N. Waverly Park Road have been installed and will be turned on closer to planned construction closures.

Contractors expect to close Perry Road between Perry Lane and State Road 37 today. Traffic will be detoured over New Harmony Road and Cragen Road to S.R. 37.

A temporary access point will open nearby connecting Lincoln Road with S.R. 37, allowing traffic to turn right in and right out only. Lincoln Road traffic wanting to travel south on S.R. 37 is encouraged to use caution and make a permitted U-turn at Big Bend Road.