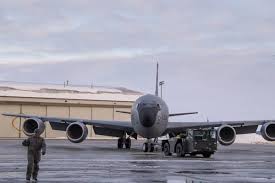 (WASHINGTON) – This week, Reps. Jim Banks (IN-03) and. Jackie Walorski (IN-02) sent a letter to United States Secretary of the Air Force Barbara M. Barrett urging her to consider Grissom Air Force Base as the future site of the U.S. Space Command headquarters.

“I applaud the Space Force for expanding their search beyond the traditional space hubs, like Colorado, California, and Florida. Indiana has an established defense innovation base, superior educational institutions and a low cost of living; our state is innovative, primed for growth and I’m glad it isn’t being overlooked,” said Rep. Banks. “Within Indiana, Grissom Air Force Base is an excellent candidate site. Its runway was designed as an alternative landing location for space missions and it has plenty of room for expansion. I encourage the Air Force to consider Grissom as they weigh options for the new U.S. Space Command headquarters.”

Please see below for the text of Rep. Banks and Rep. Walorski’s letter:

Secretary of the Air Force

Indiana is an excellent location as the U.S. Space Command headquarters. Indiana’s low cost of living and access to nationally recognized Science, Technology, Engineering, and Math universities will prove to be a worthwhile investment for the U.S. Air Force. Indiana Governor Eric Holcomb also values the partnership between defense industry, educational institutions, and the Department of Defense. In his 2020 State of the State address, Governor Holcomb committed to tripling Indiana’s federal defense investments. As defense investment continues to grow, a U.S. Space Command at Grissom Air Force Base will benefit from an increasingly vibrant national security ecosystem.

Thank you for considering Grissom Air Force Base in Indiana as the headquarters for U.S. Space Force. Please feel free to reach out to our offices with any further questions.