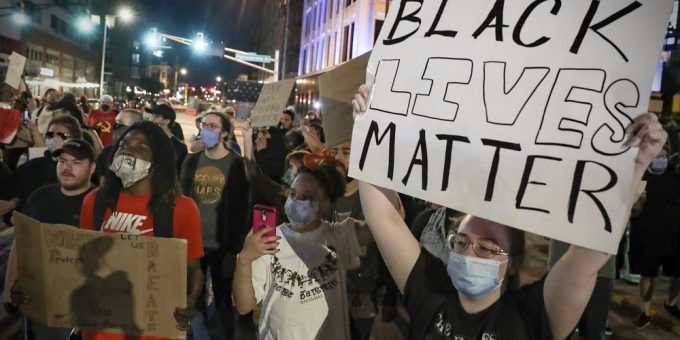 (INDIANAPOLIS) — Authorities said three people in Indianapolis were shot Saturday night, including one fatally, during what they described as peaceful daytime protests that gave way to unrest and destruction later.

No details about the shootings were immediately released, but the Indianapolis Metropolitan Police Department said no officers were involved.

“There were several people down here who had no intention to protest. Their intention was to riot,” deputy police chief Joshua Barker said.

Protests became dangerous for a second straight night in Indianapolis as buildings were damaged, officers deployed tear gas and at least one business was briefly on fire. The Indianapolis Star reported at least six people were arrested after protesters made their way into the City County Building. Police said those arrests occurred shortly before officers deployed gas canisters in the area.

Fire officials also confirmed a small fire occurred at a bank building, but the Star reported that some protesters tried to extinguish the flames.

Much like Friday, Saturday’s demonstration began peacefully but turned violent as the sun began to set. Police Chief Randal Taylor said that on Friday, at least 30 businesses were damaged and 27 people were arrested during demonstrations that continued through at least 4 a.m.

The violence in Indianapolis and many other cities was sparked by anger over over Floyd’s death in Minneapolis on Monday, which was captured on cellphone video. It led to the firing Tuesday of the four police officers who were arresting Floyd for suspicion of passing a counterfeit bill and to third-degree murder and manslaughter charges being filed Friday against the officer who used his knee to pin Floyd down, even as Floyd pleaded for air and went limp.

Indianapolis Mayor Joe Hogsett said in a statement earlier Saturday that he, like many people, “was horrified by the needless killing of George Floyd,” but urged protesters to refrain from violence.

“I will not deny your anger, for it is fairly earned,” Hogsett said. “But it is my sincere belief that in moments of anger, we all as humans have a fundamental choice: the choice between love or hate. Indianapolis, it is my hope that as you gather in anger, you will leave your peaceful protest and return home by choosing love.”