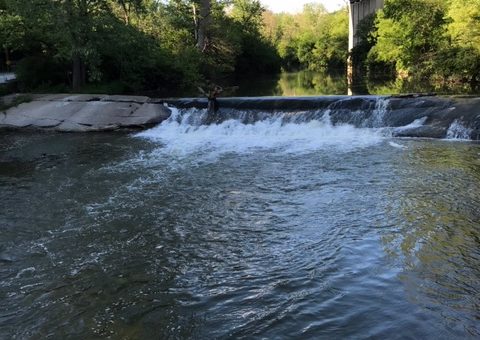 (RICHMOND) – Two Indiana Conservation Officers rescued an 11-year-old girl from drowning on Thursday after she fell into the Whitewater River in Richmond, below the Weir Dam.

The rescue was a result of the officers being in the right place, at the right time while patrolling the river.

At approximately 5:30 p.m., Indiana Conservation Officers Rhett Braun and Cole Hollingsworth were on foot, checking fishing licenses, when they heard someone yelling for help. They observed a young girl in the river, struggling to remain on the surface. Both officers entered the water, swam to the girl, and brought her back to shore.

The girl was checked out by EMTs with the Richmond Fire Department and found to be uninjured.

It was determined that the girl, who did not know how to swim, had fallen into the river while walking the bank below the low-head dam with family members. The river in this area was 8 to 9 feet deep, with a strong current at the time of the incident.

Indiana Conservation Officers remind the public to use caution while recreating near the water and recognize the dangers of low-head dams. It is also a good practice to have children and non-swimmers wear personal flotation devices while on or near the water.