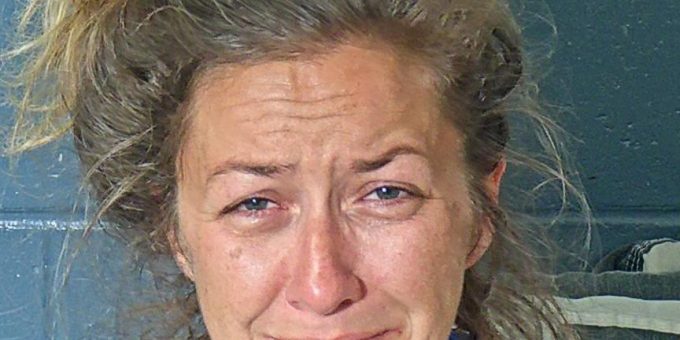 (BEDFORD) – Bedford Police arrested a woman after they were requested to the 1100 block of Hillcrest Road after a report of a possible domestic fight.

“The caller reported he heard yelling outside and saw a woman yelling for a male to come outside,” said Chief Terry Moore. “The caller told the woman he didn’t know the man she was yelling for. The woman then took off walking toward Hamilton Court apartments.”

When officers arrived the female, 37-year-old Brittany Woolridge, had left the scene but left her two children on the playground at Hamilton Courts unsupervised.

“While speaking with everyone involved officers received a call reference a leaving the scene accident near 16th and Q street involving a vehicle that returned to Brittany Woolridge,” said Chief Moore. “Officers were unable to locate the vehicle but did receive information that Woolridge had made it to Shorty’s Bar & Grill. Officers arrived and located Woolridge inside the bar. While speaking with Woolridge she became combative and starting resisting while being escorted out of the bar.”

While inventorying her vehicle, officers located drug paraphernalia and a substance that later tested positive for marijuana.

The Department of Child Services was contacted and arrived at Hamilton Courts along with the children’s father. The children were released to him.

Woolridge admitted to hitting a vehicle in the area near the city pool and fleeing.

Woolridge was arrested on charges of resisting arrest, neglect of a dependant, possession of marijuana and drug paraphernalia, and leaving the scene of an accident.