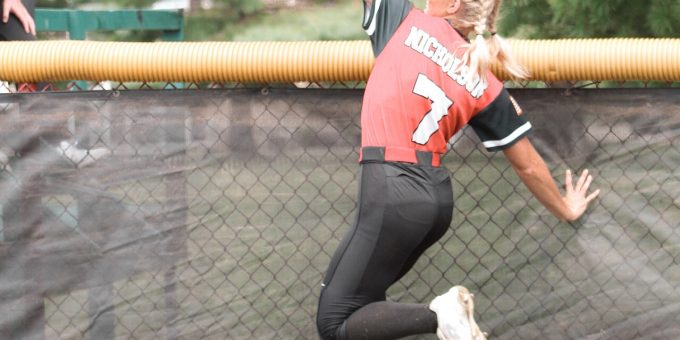 While the virus swept across the nation and cost Nicholson most of her second season with Lake Land College, she blazed a path to the next level, earning a scholarship from Eastern Illinois. She will join that Div. I program with three years of eligibility remaining as she chases her dreams.

Nicholson is fast enough to catch a wink. As a left-handed slap hitter, she hit .340 last season (in the truncated 2020 spring fling of 25 games) and stole 33 career bases (while getting caught only twice) during her career at Lake Land.

Speed is a valuable asset when the bases are only 60 feet apart. She was a demon at the top of the BNL order, hitting .435 and stealing 20 bases as the Stars won the 2018 Class 4A sectional championship. Now she’s becoming the complete five-tool player, adding pop and glove work to her body of work.

“When I played for BNL, I had my bunting and slapping game down,” Nicholson said. “But I didn’t have power. Now I have that as well, all three aspects of the game. So when a defense adjusts to my slapping, I can just swing away.”

Nicholson, an outfielder by trade, will be making the jump from junior college to a program in transition. First-year coach Tara Archibald guided the Panthers to an 11-10 mark in the shortened 2020 campaign.

“We are thrilled to add Katie to our team,” Archibald said. “She has played for a winning program and a very well coached team at Lake Land the past two years. I know she will come in very prepared and ready to compete right away.

“Katie is extremely fast and so fun to watch run the bases. She will bring great athleticism and work ethic to our program, both on the field and in the weight room.”

Lake Land was off and running in 2020, going 21-4 and earning a No.14 ranking in the NJCAA poll. The possibility of competing for a national title came to a crashing halt when all spring college sports were cancelled in mid-March as the virus started to take a dire toll.

“My team was absolutely amazing and we were expected to do very well in the national tournament,” Nicholson said. “So it was devastating to have that taken away from us. Also, being a sophomore at a JUCO, it was tough. We really didn’t want to go back. You’re there to get the general classes taken care of, and going back wouldn’t help.”

Fortunately, Nicholson was already on the EIU radar after hitting .316 as a freshman and earning All-Region honors while helping Lake Land to an appearance in the national tournament. She was again All-Region this spring.

“We were also lucky enough to play several Div. I teams during the fall season,” Nicholson said. “So I feel fortunate. Transferring to EIU (located in Charleston, just 17 miles from Lake Land’s campus in Mattoon in the state’s midsection) is exciting.

Nicholson is planing to double major in exercise science and business, so the extra year of eligibility (granted by the NCAA to all athletes in spring sports) will help her achieve that goal, once the state opens up the college campuses.

She’s taking it all on the run, just like she did as the Stars won the sectional title for the first time in 18 years.

”That,” Nicholson said, “was my favorite memory. We came together as a team.”