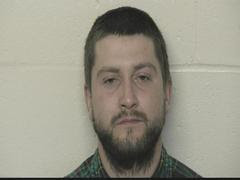 (SCOTTSBURG) – Sergeant Tracy Spencer arrested a southern Indiana father on Wednesday after allegedly finding him passed out behind the wheel and traveling with his infant child.

Around 9:50 p.m. Wednesday, Indiana State Police Sergeant Tracy Spencer was patrolling I-65 northbound near Scottsburg when he observed a vehicle stopped along the right side on the interstate with its flashers on. Sergeant Spencer stopped to check on the occupants, and upon approaching the driver’s side of the car, found the male driver either asleep or passed out behind the wheel. The driver’s nine-month-old son was standing on his lap, crying and banging on the window.

After several attempts, Sergeant Spencer was able to wake the driver, later identified as 34-year-old Derek W. Ribelin, of Vallonia.

Ribelin appeared to be intoxicated, and Sergeant Spencer also observed an open alcoholic beverage container sitting on the passenger’s seat.

Scottsburg City Police and Scott County Deputies arrived to assist, and Sergeant Spencer continued the investigation, which included standard field sobriety tests and a preliminary breath test with a result of 0.136 blood-alcohol content.

Sergeant Spencer then transported Ribelin to Scott Memorial Hospital and obtained an official blood draw. Officers who remained at the scene also located a loaded pistol in the driver’s side door pocket.

The child was taken by ambulance to Scott Memorial Hospital for observation and, in a short time, released to the biological mother.