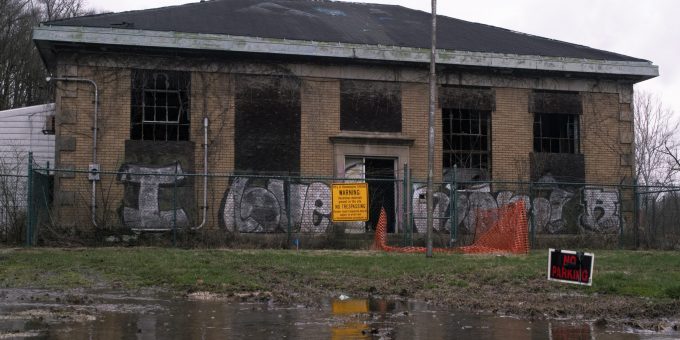 (BLOOMINGTON) – The City of Bloomington Utilities Department (CBU) has begun demolition of the decommissioned Griffy Water Treatment Plant this week.  Located on North Dunn Street on the northern edge of the lake, the plant supplied drinking water sourced from Griffy Lake from 1925 until 1996, when Lake Monroe became Bloomington’s sole water source and the plant was taken out of service.

The demolition of the structure is scheduled for substantial completion within 90 days, after which the site will be restored to a natural meadow that can be enjoyed by visitors to the Cascades Park Trail and, when complete, the Griffy Loop Trail (currently in the design phase).

While adaptive reuse of the structure by the City and several prospective developers proved cost-prohibitive, features of the building’s entryway will be preserved during the demolition, to be incorporated into a new or existing City property as a monument to the plant’s role in Bloomington history.

During the process of exploring options for the building’s future, CBU in 2017 determined the presence of mercury inside the plant and around its premises.  Working in compliance with the Indiana Department of Environmental Management (IDEM), CBU has conducted extensive remediation of the site, including the removal of asbestos and PCB materials that were also found there and taken to hazardous waste treatment sites.  Since 2018, CBU has maintained a round-the-clock security presence and installed lighting and fencing around the hazardous property to deter trespassers in the interest of their safety and to prevent recontamination.

“CBU has been committed to the remediation of the Griffy site, and we are glad to resolve it safely after almost three years,” said Utilities Director Vic Kelson. “Although we wish it had been practical to preserve the structure for a new use, we’re pleased that the site will be restored to a natural landscape and serve our community as a recreational area.”

Use of the Griffy Lake Nature Preserve will be unaffected during the demolition, although visitors are asked to comply with CDC guidelines for physical distancing, mask-wearing, and other hygienic protocols while using City parks and trails.  Also in compliance with public health guidelines, the restrooms at Griffy and all City parks remain closed.

Currently in the design phase, the Griffy Loop Trail will also offer easy access to the restored natural area.  One of seven Bicentennial Bond projects in development, the new trail will create a six-mile loop around the lake and connect with the existing trail network.  The Parks and Recreation Department is working with a local consultant to improve access to the Griffy Lake trail system with an improved pedestrian crossing over the spillway, and with the addition of a section of trail over the top of the Griffy Lake dam.

Built in 1925, the Griffy Reservoir and Water Treatment Plant produced the first reliable long-term drinking water supply for Bloomington and Monroe County. The natural landscape of southern indiana has few large streams, natural lakes, or aquifers. As a result, Bloomington had a long history of water shortages, especially in dry seasons. Today, our community is served by the Monroe Water Treatment Plant which sources its water from Lake Monroe.