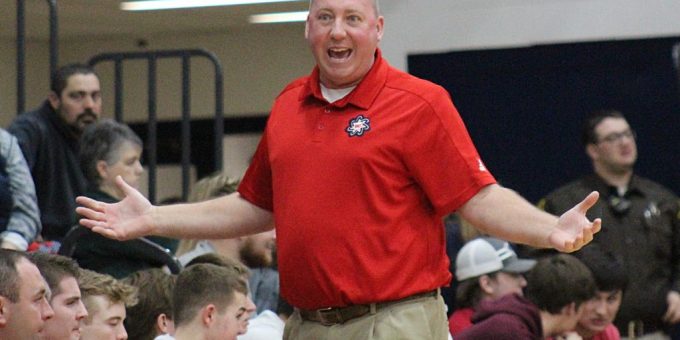 BEDFORD – When the guillotine fell, when the repercussions of the looming coronavirus epidemic were made crystal clear and the crown of Hoosier Hysteria – the boys basketball state tournament – was lopped off that second week of March, Bedford North Lawrence basketball was already in transition phase.

The Stars had been eliminated in the sectional semifinal, and Jeff Hein was wrapping up his first season with the program. Paperwork, planning, personnel evaluations, the behind-the-scenes stuff that sets the tone for the future was under way.

Then that future was taken away. No school, no meetings, no gymnasium, no weight lifting. The sword dropped and everything came to an immediate halt. That was eight weeks ago, although it seems like an eternity.

Finally, after enduring the mandated quarantines and restrictions, rays of light and hope are breaking through. Indiana is emerging from its virus hibernation, and in this state that means the sound of bouncing basketballs will once again vibrate across the land.

Normal is still a long way off. Before, that would mean a month of June with practice sessions, scrimmage games and camps as next year’s team started taking shape. Now, Hein hopes the government gives the clearance for that to begin in July, at least in some fashion.

Second, that means, as the Stars stagger out into the proverbial sunlight (like prisoners emerging from solitary confinement, shielding their eyes from the brightness), Hein needs to find out what he has.

He knows what he had. The Stars lost only two seniors (Bailey and Sasser) from the 15-10 campaign, and Bailey was responsible for a huge chunk of the stats and success. Leach is recovering from knee surgery. But if Hein doesn’t get them together until July, who knows what they’ll look like? One thing is certain: it will become obvious, who spent the stay-at-home period parked on the couch, and who used the unexpected ‘vacation’ time to improve something more than their X-box skills.

“It’ll have been four months since we got beat (to end the season),” Hein said. “Those kids that are out there working, and kids who aren’t, there could be some passing up. If someone doesn’t work, they could get passed up. Just because you played this year doesn’t mean you will next year if someone else is working hard.”

Without organized workouts and open gymnasiums for practice, this virus void has created a time warp back to old-time basketball, when a kid got better in the summer the old-fashioned way – a ball, a goal in the driveway, and a goal to reach. Most kids now have no idea how to hit a jump shot in the wind, adjusting for all the outside variables, or drive to the basket and absorb contact without crashing to asphalt and coming up bloody.

“Everyone went out and played in the park, played outside,” Hein said with a laugh. “I’m not sure anybody does that any more. These kids all play in gyms, where we were used to playing in the driveway or the park. That’s kind of a lost thing. It’s different.”

Hein hopes his team has grown, in a figurative and literal sense. Teenagers do go through transformations, so perhaps a few have grown a few inches. Perhaps some found a way to muscle up, even if that was a weight bench in the basement, because that is definitely needed. Everyone else on the future BNL schedule faces similar obstacles.

“I’m still hoping some of these kids put on as much weight over this time period as I did.”

If the current state plan remains intact, Hein hopes to convene for practices and camps between July 6 and July 25. The 2020-21 schedule will include new teams for the holiday tournament (Castle, Eastern Greentown and Owen Valley plus Milan, Scottsburg, University and Bloomington North) and the return of Jasper to the regular season.