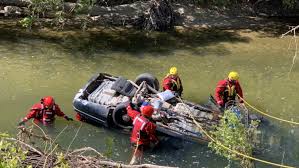 (BROWNSBURG) — Two people found dead in a car that crashed and overturned in a suburban Indianapolis creek have been identified as a local man and woman, authorities said Wednesday.

The Henricks County Sheriff’s Department said the victims found in the car that crashed in Brownsburg, just west of Indianapolis, had been identified as David Cuskaden, 57, and Lisa Grissom, 53. Both were residents of nearby Avon.

Their bodies were found Tuesday afternoon in a car discovered upside down in White Lick Creek in Brownsburg. Investigators said friends had last seen Cuskaden and Grissom around 3 p.m. Tuesday. The car was spotted in the creek about 40 minutes later.

Authorities believe the Ford passenger car was traveling northbound on a county road when the driver lost control for an unknown reason and the vehicle traveled off the road’s west side and overturned in the creek.

Police and the county coroner’s office continue investigating the crash.