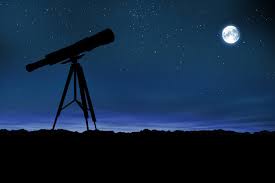 (UNDATED) – Venus is that unbelievably dazzling evening “star” you’ve probably already noticed. You don’t need a star chart. It’s the brightest object in the night sky except for the Moon. Just look toward the western skies at nightfall.

The other planets – Jupiter, Mars, and Saturn – all rise before the Sun. Mercury rises near the sunrise point on the horizon in the predawn sky.

THE BRIGHTEST STAR IN THE SKY

Sirius is nicknamed “the Dog Star,” because it’s the brightest star in the constellation Canis Major. Sirius is super easy to locate: Just face toward the south and look for Orion. The three bright stars that make up Orion’s belt point downward, toward Sirius. See my post on Sirius, The Brightest Star in the Sky Tonight.

See the Almanac’s Bright Planets Calculator to find out when planets rises and sets from your backyard. Just type in your zip code.

You can also check the Almanac’s Moonrise and Moonset calculator.