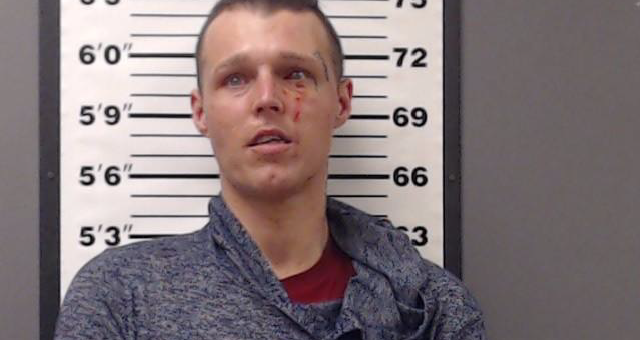 According to Madison County Prosecutor David R. Sutter, 35-year-old Jonathan Hoffmire was also found guilty of being a habitual offender in the trial in Jefferson County Circuit Court that commenced on March 18th and concluded on March 20th.

Chief Deputy Prosecutor Blaine Goode said, “Anytime we have a trial, we methodically present evidence with the hope of obtaining an outcome that will hold a convicted offender accountable and bring justice for the victim. In this case, the battery inflicted by Mr. Hoffmire on the victim was found to have resulted in a severe head injury that caused incapacitation to the point of hospitalization in the Intensive Care Unit at University of Louisville Hospital for twenty-three days. I believe this verdict satisfies the accountability and justice sought.”

On Thursday, January 16, 2020, police officers were dispatched to an area in Madison, near Ivy Tech Drive and Regatta Court, due to a report of a male subject rolling around on the ground injured. The caller reported there was another male subject nearby with facial injuries that he was walking away from the area, wearing a red hoodie, a black jacket, and blue jeans.

As officers approached the scene, they were stopped by a female who directed them to the victim. Officers found the man, later identified as Cory Dade, lying in the grass, semi-conscious. Police reported Dade’s speech was unintelligible and he was bleeding heavily from the nose and mouth. In addition, he had noticeable swelling around both eyes and on both cheeks and was having difficulty responding to the officer’s questions.

When EMS arrived on the scene, they transported Dade to King’s Daughters’ Hospital for a suspected head injury. Dade was then immediately sent by stat flight to the University of Louisville Hospital due to the severity of his injuries.

A witness told police she and her boyfriend observed a portion of the incident and saw what she described as a man stomping someone’s head as the person lay on the ground. She stated they drove nearby to see if they could help the man on the ground and Hoffmire approached them and asked for a favor, which they declined. The witnesses said Hoffmire took Dade’s hat and black jacket. The witness then called 911, giving a description of what they had observed, and officers of the Madison Police Department and Jefferson County Sheriff’s Department arrived within two minutes.

Officers then located Hoffmire near the intersection of Regatta Court and Kennedy Drive. He was dressed as described by witnesses and his face was bleeding. Hoffmire was also transported to King’s Daughter’s Hospital, where he was treated for minor injuries.

During a statement to police, as well as during his testimony at trial, Hoffmire alleged that he was acting in self-defense when Dade sustained the life-threatening injuries. Goode, however, pointed to a variety of evidence that successfully contradicted the self-defense claim.

In addition to the guilty conviction for the battery offense, Hoffmire was also determined to be a habitual offender based on prior felony convictions. Hoffmire faces up to 12 years in prison and will be sentenced at a later date.

Prosecutor David Sutter and Chief Deputy Goode credited the 911 callers and quick response of police and EMS with saving Dade’s life. Citing testimony from the University of Louisville trauma surgeon who was working in the emergency room when Dade arrived.

“Mr. Dade would have perished if not for the quick response of everyone involved,” Sutter stated.