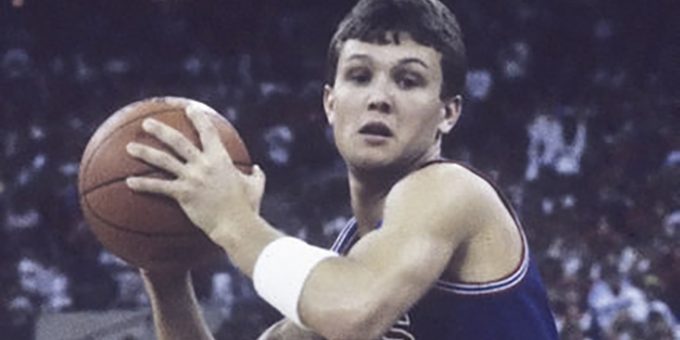 Note: This is the third in a series of stories this week on the 30th anniversary of Bedford North Lawrence’s 1990 state championship.

BEDFORD – In the Decade of Excess and Greed, which the 1980s have been labeled, in the days of big hair, leg warmers, mullets and Rubik’s Cube, rock stars ruled. They were larger than life, idolized by the mass, emulated by millions.

Madonna, Prince, Aerosmith, Motley Crue. Michael Jackson, the ageless Rolling Stones. They were icons, capable of influencing society, of capturing hearts. “As a rock star, I have two instincts,” Bono, lead singer for U2, said. “I want to have fun, and I want to change the world.”

In its own way, certainly within the borders of Indiana, Bedford North Lawrence basketball was a super group. The Stars were rock stars, traveling with an entourage, protected by security, whisked in and out of arenas, playing before packed houses every night of a whirlwind tour across the state, the Starcruiser leading a caravan. Their front man was a household name. All they wanted to do was have fun and change the world.

And the 1989-90 season would be their chart-topping, multi-platinum, best-selling smash hit.

They opened the regular-season stage curtain on Nov. 21, closed it on Feb. 23 during an emotional Senior Night farewell. They spent time at No.1 in the polls.

The funny thing? As a testament to how competitive and driven they were, they remember more about the two games they lost – by a total of two points – than the 20 they won prior to the state tournament. Two baskets from going undefeated. That still irks most, if not all, of them.

“Those are the ones people like to talk about, because people excepted us to win those as well,” said Chad Mills, a starting forward. “As a team we didn’t expect to get beat, and fans definitely didn’t want us to get beat.”

The key to all that success was focus. Amazing, piercing, block-it-all-out, laser-beam focus.

“My philosophy as a coach was the next game was the most important game,” coach Dan Bush explained. “Because it was the next one. That’s the way I always approached it. I tried to keep the kids in that mind frame as well.

“You tend to remember the games you lost more than the games you won. We could have easily been 31-0, but we won a few close games too.”

“What Coach Bush was great at was not looking too far ahead,” Mills said. “He beat that into our heads quite often. He beat a lot of things in our heads. You’re looking at the prize at the end, but you didn’t overlook any team or any game. That next game was what you focused on.

“It was crazy, everywhere we went. It was simple for us. We got put on a bus, shuffled in the back door and shuffled out the back door. So there was a lot of craziness around us that we weren’t exposed to. We were lucky.”

So in keeping with the Bush mantra, here’s 1989-90, one game at a time, (with a little extra on the two setbacks, of course). Some of them have entrenched, unforgettable moments. A couple have faded while overshadowed by others. But each was its own gem, even the losses.

BNL 92, Salem 36: The opening game was moved to Seymour, with its 8,000 seats, and the Stars were show stoppers. Damon Bailey scored 35 points, and Alan Bush made his varsity debut with 16. Salem coach Jim Irwin, not known for hyperbole, made a bold statement: “Damon is so much better than anyone in the world.” Wow. Compare that to the remark by Scottsburg coach Bill James (“He’s just another Indiana high school freshman”) after his debut three years earlier.

“It was just really cool, as a 16-year old, that I got to play in front of a sold-out crowd everywhere we went,” Bush said. “That was a huge contrast from playing on the freshman team the year before. At a freshman game, you have immediate family, and that’s about it. Going from that, to where half the community was at your game the next year, was a stark contrast.

“I remember taking the floor and playing in a gym that seats 8,000 people, looking around thinking ‘Wow, this is just the first game of the year.’ But that’s what you wanted. You fed off that type of thing.”

BNL 64, Bloomington North 55: Bailey scored 36 and ignited an 18-3 stretch run as BNL made its home debut and extended its home winning streak to 33 straight.

BNL 93, Washington 55: Bailey recorded a triple-double of 23 points, 11 rebounds and 12 assists. The Stars had five score in double figures and two others had 9. Not too bad.

BNL 88, Bloomington South 82: In the days when BNL always beat the Panthers, Bailey had 37 points and Jason Lambrecht added 21 while going 10 for 10 from the floor (most from less than five feet).

BNL 92, Perry Meridian 45: Bailey had 39 points and one of the signature moments of his career, a transition dunk over 6-foot-6 center Doug Fites that even got Coach Bush off the bench to applaud. Today, it would be known as “posterizing.”

BNL 105, Edgewood 75: The Stars, with state career scoring leader Marion Pierce in attendance, set a school record for points with an incredible shooting display. Bailey had 36 and hit 6 3-pointers, while Bush added 23 with 7 treys. As a team, BNL was a remarkable 16 of 24 from long range.

“The Edgewood game was a lot of fun,” Bush said. “The way we shot, it was ridiculous. Hence the 105 points.”

BNL 65, Indianapolis Pike 60: In the opening game of the Hall of Fame Classic, played at Assembly Hall (a little foreshadowing for Bailey, who had already announced his intention to play for Indiana University), Bailey scored 31 points and Lambrecht added 14.

Lawrence North 51, BNL 50: The Stars clashed with the defending state champions in the Hall of Fame final. Bailey had 26 points, but the Wildcats had a monster in the middle (7-foot tower Eric Montross, destined for North Carolina) and swingman Eddie Casiano (16 points). Montross had 16 points and 14 rebounds, and was a huge reason why BNL shot a dismal 35 percent.

BNL 88, Carmel 73: The Stars faced the Greyhounds at ancient Hinkle Fieldhouse and added to the lore of the building. Bailey erupted for 42 points (hitting 17 of 19 shots) and Lambrecht totaled 18 (hitting 8 of 9). Scott Shepherd had 31 for Carmel.

“It was fun playing Carmel at Hinkle Fieldhouse,” Bush said. “That’s not something every high school player gets to do. I look back on those things as getting to play at Hinkle, at the Hoosier Dome, at Assembly Hall. Those are things a lot of people can’t say they’re ever done.”

BNL 62, Jennings County 40: Bailey had 23 points and 13 rebounds, although this game might be classified as one of BNL’s least-pleasing, uninspired performances. Even with a 22-point victory.

BNL 70, Bloomfield 33: The Stars trailed 11-3 after the first quarter, and memories of BNL’s loss at Bloomfield two years earlier surfaced. They were quickly doused. BNL went on an 18-4 run in the second quarter and raced away as Bailey scored 25 and Bush totaled 19. That victory pushed the Stars to the No.1 spot in the poll the next week.

BNL 66, Brownstown 60, 2OT: This was a great escape, with some controversy. Bailey hit a shot at the end of regulation – first ruled a 3-pointer for the win, then changed after much discussion by the two officials – to force the first overtime. He drilled another basket at the buzzer to force the second OT, finishing with 37 points.

The video would later reveal the disputed bucket was indeed a 2-pointer.

BNL 85, Jeffersonville 81: Bailey scored 36 points, but the Stars had to survive a second-half letdown as a 54-35 lead vanished. So did BNL’s spot atop the poll.

BNL 85, Floyd Central 61: The Stars earned some revenge for the two losses that tainted the previous season, although this Floyd team was a shell of its previous self. Bailey had 26 points and Lambrecht totaled 15.

New Albany 60, BNL 59: Ron Combs led the New Albany attack with 19 points, Rob Conway had 17, and Joey Hether hit a crucial 3-pointer in the final minute as the Bulldogs pulled off the upset on their home court.

Bailey had 30 points. With New Albany protecting a 3-point lead in the final seconds, the Dogs elected to foul Bailey with 2 seconds left rather than allow a potential trey to tie it. Bailey made the first, then banked in the second while attempting to miss it and snag the rebound.

Area coaches later insisted New Albany was better at four of the five positions. BNL would hope for a revenge rematch later.

BNL 82, Martinsville 69: The Stars bounced back as Bailey scored 32 points.

BNL 77, Evansville Central 47: Bailey had another triple-double with 32 points, 13 rebounds and a career-high 15 assists. One of those was truly spectacular, a half-court, behind-the-back pass off a loose ball scramble that Ethan Cox gathered for the score. He was more nervous about catching it than Bailey was about throwing it.

BNL 81, Columbus East 75: As Bailey and the seven-man senior class bid farewell to BNL Fieldhouse (where the Stars never lost in Bailey’s career), Bailey exited with 40 points and 14 rebounds, and there were few dry eyes as he addressed the crowd of 6,300 to thank them for the four years of wonderful memories.

“I was sick on Senior night, I thought I had mono, and it scared the daylights out of me,” Cummings said. “I didn’t want to let my teammates down, especially with what we had in front of us.

“It was a special time, to be surrounded by good players and one super-duper player. It was crazy, just the support we got from the community.”

So the curtain closed. BNL was 20-2, heading into the storm of the state tournament. History awaited. The rock stars had an encore.

Next: The countdown to ‘The Record’