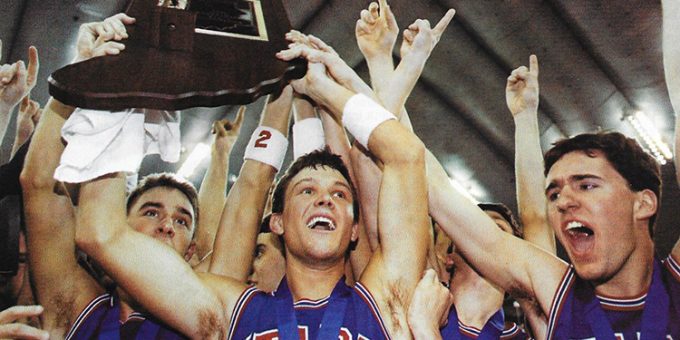 Note: This is the first in a series of stories this week on the 30th anniversary of Bedford North Lawrence’s 1990 state championship.

Those words captured the moment, an entire storybook season, a script so perfect, so sensational it would not believed. After four years of glory, of pandemonium and frenzy surrounding the best player in Indiana high school history, Bedford North Lawrence wrote the ultimate ending to a tale for the ages with the 1990 state championship.

The scenes are etched, like the limestone this community was built upon, with hammers and spikes into memories. The games live in legend, the season immortalized with a banner that hangs in the southwest corner of BNL Fieldhouse, above the court that is now named for the hero.

The Stars lived through, and penned with a basketball as their instrument of choice, Indiana hoop history. It’s an era that will not, likely can not, be repeated. They were, with Damon Bailey in the leading role, the last of the Hoosier heroes.

Has it really been 30 years? How is that possible? Many of the 12 players on the roster now have children who have gone through the program. The kids of yesterday, swept up in the currents of chaos surrounding them, are now men of today. They are still recognized by the fans in this state who worship the game.

“As I’ve gotten older and time has passed, I realize it more than I did then, how lucky we were to be there,” Chad Mills, a junior starter on that ‘90 squad, said. “We were just in the middle of it, a bunch of kids, and it was the right time.

“It’s amazing to me how many people, some I know and some I have no idea who they are, will come up and talk abut it. And I appreciate that. We were just having fun out there, it was a fun ride from start to finish. Now I feel lucky that I got to go through it. I guess it’s all about timing.”

The timing was so perfect. BNL had been to the Final Four twice, then suffered a heartbreaking loss to rival Floyd Central in the 1989 regional. The Stars came back hungry, intent on avenging that defeat, determined to quiet the critics who were sure they weren’t quite good enough to compete at the highest level, to win the prize that had escaped so far.

From the opening day of practice, to the final moments on that snowy March 24, from the quiet of the practice floor to the bedlam before a world-record crowd of 41,046, with a media swarm of 431 writers and television pundits, BNL had a single, laser-beam focus of winning the state title.

And they did it, with Bailey’s legendary heroics during the final 2:38, beating an undefeated, top-ranked opponent, raising that huge trophy into the air as the throng in the Hoosier Dome roared. What a moment.

“It was the perfect ending, for me personally, for my career, for that particular team, all that we had gone through,” Bailey said. “Dealing with everything that came along, to finally be able to lift up the championship trophy.”

During the next five days, let’s relive the greatest of seasons. Here’s the viewpoints, from the players and head coach who were involved, to recall:

X- The mindset. How did BNL approach the campaign, and what were the keys to the ultimate success?

X – The regular season. The Stars were state rock stars, performing before packed houses every night, in the biggest gymnasiums available. They suffered two 1-point losses.

X- The regional. With Bailey about to break Marion Pierce’s state record for career scoring, BNL went through the craziest of weeks in the buildup for a fateful Saturday in Seymour.

X – The final games. BNL battled through a tough semistate and rallied from behind to conquer Southport in the state semifinal. In addition to Bailey, every game had its own x-factor warrior to step forward. Some were unexpected.

X – The final 2:38. Down six points, Bailey carried the Stars to the mountaintop. Go through the step-by-step, shot-by-shot comeback that cemented his place among the Mount Rushmore players in state history, and don’t forget the final 20 seconds as Concord launched four shots to force overtime.

Hear from Damon Bailey, Alan Bush, Jamie Cummings, Paul Stevens, Chad Mills and Coach Bush. Don’t forget about Dwayne Curry, Jason Lambrecht, Ethan Cox, Ryan Moutardier, Johnny Mike Gilbert, Brent Conner, Trent Todd, the coaching staff and others who were an integral part. Heck, the Stars even had a “dunking manager” made famous on Indianapolis television. Everyone had their moments.

Enjoy the week ahead. It was a great ride, and the stories never get old.

Next: BNL’s mindset was simple – win the whole thing