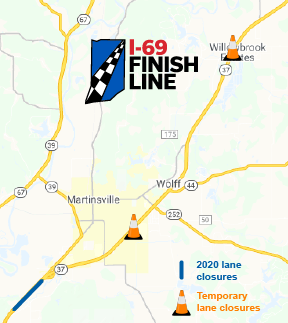 (MARTINSVILLE) – Starting next week, drivers should expect traffic delays on State Road 37 and State Road 39 in and near Martinsville.

Beginning on or after Monday, March 16, the right lane of S.R. 37 northbound will be closed between the Liberty Church Road and S.R. 39 exits.

Indiana Department of Transportation (INDOT) contractors are preparing to rebuild the S.R. 37 southbound lanes from S.R. 39 to the south end of the I-69 Finish Line project, including the southbound S.R. 37 bridge over Indian Creek. This work will reduce S.R. 37 to two lanes – one in each direction – during much of 2020.

Dynamic signage is being installed to help traffic on I-69 and State Road 37 anticipate slowing or stopped traffic.

S.R. 39 is being improved this year to move more traffic during the full closure of S.R. 37 in Martinsville next year. Drivers should expect traffic shifts, flaggers and short delays where crews are working.

Beginning on or after Monday, March 16, contractors will be removing raised medians at the S.R. 39 intersections with Morton Avenue and Morgan Street. Once median work is complete, paving crews will be performing patching work on S.R. 39 between S.R. 37 and the White River.