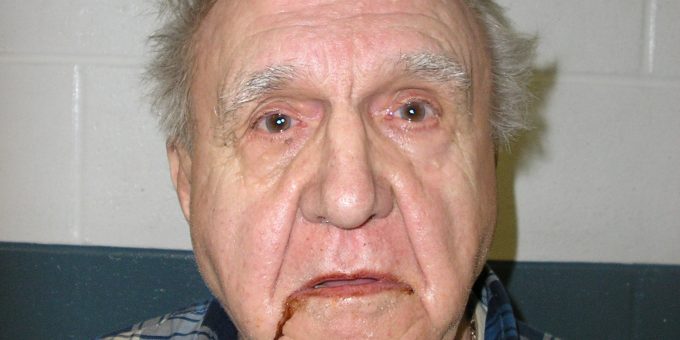 (BEDFORD) – Indiana State Police arrested 79-year-old Sam Shaw this afternoon on a warrant on charges of stalking and harassment.

Shaw first came to the attention of police in January when a report came into the office stating Shaw began harassing a Bedford couple for unknown reasons in March 2019.

“The victims claimed that over the past nine months, Samuel Shaw has been harassing them by making repeated phone calls to their business and repeatedly driving by their residence and place of work,” said Prosecutor Sam Arp.

The victims, Eric and Debra Munson, claim that Shaw was making repeated harassing phone calls and leaving voicemails on their business line. They also claim that Shaw has been seen parked outside their residence. On one occasion, the victims report they arrived home and Shaw yelled at them, ‘you can run but you can’t hide.’ At that point, the victims asked Shaw to stop calling and harassing them or they would pursue a lawyer and seek a no-contact order. The victims say the harassment continued. They also provided police with several recorded voicemails from Shaw.

On April 14, 2019, the alleged victims sent a certified letter to Shaw, which was signed received on April 16, 2019. This letter requested that Shaw stop any communication with the couple. Following the receipt of the letter, officials say Shaw continued to repeatedly call the business on at least 12 occasions as documented by caller identification. The Munson’s eventually had Shaw’s number blocked, but they say that the calls continued. The couple also noted that Shaw proceeded to park his vehicle outside of both their residence and business. They say that he once followed them to the Ruler store in Bedford. They say these activities occurred at least four times between September 11 and December 7, 2019.

In January 2020, police were notified that Shaw continued to pursue and harass the victims by showing up outside their residence and also driving past both their home and business honking his horn. Shaw was interviewed by police and acknowledged that he had received the cease and desist letter from Eric and Debra Munson. He also stated he has had communication with their business but denied driving by or sitting outside their residence. He later stated he did drive by the house, saw Eric outside and yelled something at him. Shaw says that he could not remember exactly what he said at the time.

“The police investigation found Mr. Shaw to have repeated and continued impermissible contact with the victims for more than 10 months, even after acknowledging receipt of the cease and desist letter. In addition, police report he continually and intentionally went out of his way to harass the victims,” Prosecutor Arp added. “Eric and Debra reported they felt intimidated, frightened and threatened by Mr. Shaw’s actions.”