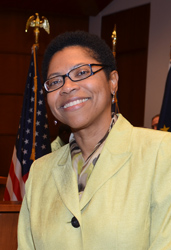 (INDIANAPOLIS) — A woman who’s a longtime professor at Indiana University’s downtown Indianapolis law school is expected to become the first person of color to lead that school.

Karen E. Bravo was recently named dean of the Indiana University Robert H. McKinney School of Law, pending formal approval by the IU Board of Trustees at their April meeting.

If her appointment is approved, Bravo will start her new job July 1 at the school, which is located on the campus of Indiana University-Purdue University at Indianapolis. Bravo, who is black and from Jamaica, will become the second woman to lead the school, and its 13th dean since the school’s affiliation with IU began in 1944.

“Karen Bravo has distinguished herself for well over a decade on the McKinney faculty as both a leader and a scholar,” IUPUI Chancellor Nasser Paydar said in a statement.

Bravo’s campus activities over the years have included helping found and lead a leadership program for women and underrepresented faculty and staff at IUPUI.

She’s also the founder and leader of the Slavery Past, Present, and Future Project, which organizes an annual conference for a multidisciplinary exploration of human trafficking and slavery.