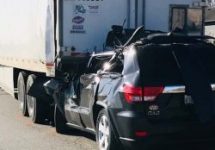 In a news release, Indiana State Police said, “The investigation is ongoing and there is no further information to release at this time.”

The crash involved a passenger vehicle and a semi tractor-trailer near the one-mile marker on Interstate 70 westbound.

Traffic was slow in the area due to an earlier accident in Illinois at the 148 mile marker.

According to troopers, a semi tractor-trailer driven by 54-year-old Sergiy S. Shadrin, 54, of Newmarket, Ontario, was traveling westbound on Interstate 70 in the driving lane near the state line with its hazard lights activated because of slow traffic. Shadrin told police he felt an impact in the rear of his semi and immediately stopped.

According to police, a 2011 Jeep driven by Williams was traveling westbound in the driving lane directly behind the semi tractor-trailer and failed to observe slowed traffic, running into the rear of Shadrin’s semi-tractor trailer. Williams died from her injuries at the scene.