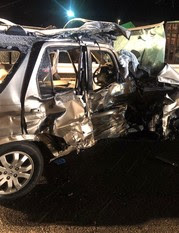 (KNOX CO.) – Friday at approximately 11:05 p.m., Indiana State Police and Knox County Sheriff’s Office responded to a two-vehicle crash on US 41 at St. Thomas Road that claimed the life of an 18-year-old Vincennes man.

For unknown reasons, Twitty failed to yield the right away and drove into the path of a 2016 International tractor-trailer that was traveling north on US 41. After impact, the tractor-trailer left the roadway on the east side and overturned.

The driver of the tractor-trailer, 49-year-old Paul Brandle, of Hawesville, KY, had to be extricated by fire department personnel. He was transported to Good Samaritan Hospital in Vincennes where he is currently being treated for non-life threatening injuries. Twitty was wearing a seat belt but was pronounced dead at the scene by Knox County Coroner Brian Hagen.