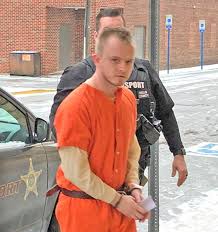 (OSSIAN) — A northeastern Indiana man is heading to prison in the death of his girlfriend’s 18-month-old daughter.

Brent Scheiber, 27, was sentenced on Thursday to 35 years. He pleaded guilty in December to aggravated battery.

Kamryn Price suffered bruising to her forehead and bleeding on the brain in January 2019 at a home in Ossian, about 110 miles northeast of Indianapolis. She died a few days later at a hospital.

Scheiber told investigators he was caring for the child while his girlfriend was working and that the toddler must have fallen from a crib.

A probable cause affidavit said the injuries were not consistent with a fall. An autopsy showed they would have been caused by a blow to the head from a fist or similarly sized object with extreme force.